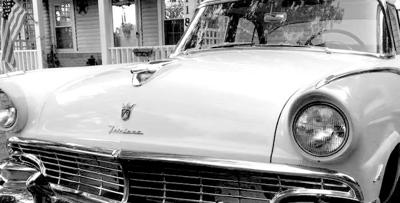 Local car enthusiast Angie Parrish figures she’s the only woman in the county with three different car haulers, maybe in the whole state.

Parrish is a Ford girl, always has been, from back in her teens when her first car, a Chevy, blew a motor and launched her passion for cars. Over 65 vehicles later, Parrish is still tinkering with cars, from a 1956 Fairlane parked in the “snake pit,” her lower-level garage that once held her Shelby Cobra, or the 1996 built Mustang Cobra in the outbuilding to the 2007 black-and-grey Shelby Mustang that lives in the main garage. The latter two still see the racetrack.

The 1996 Mustang, her racecar, is a collector piece in its own right. Bought new by her late husband, it was autographed by Parrish’s idol, the late driver-designer and automotive legend, Carroll Shelby.

“I’ve had the chance to meet him four times,” Parrish recalls. “I really admire (Carroll) as a racecar driver and what he did with the cars he made.”

One of her goals is to attend the French Le Mans, 24-hour-long endurance race (that Shelby won in 1959). I’ve been to France, Nürburgring (a German track known for its difficulty, affectionately known as the Green Hell) and the BMW world headquarters, the Porsche headquarters. I love all cars and I’ve had just about every kind of car, but I love my Fords. They’ll get you there and get you back,” she said.

The Mustang Cobra is a limited production car with modified suspension and hand-built engine that bears a plate on the valve cover with the names of its two builders.

Parrish isn’t partial to cars over trucks and loves four wheel drives. She’s restored a 1987 Bronco, the classic big-bodied 4x4, that hasn’t yet hit 100,000 original miles, and her next project is the 1970 F-1oo that definitely has.

Behind the wheel, Parrish is a powerhouse in her own right. She has tracked wins in autocross, road races, even done a bit of rally racing.

She’s taken to the track with BMWs, Audis, even some Ferraris and Dodge Vipers. She’s been honored on occasions to drive for other owners.

“I’ve been to 10 different racing schools and two of the Ford Racing and Performance Schools in Utah,” Parrish said.

She was part of a group of drivers asked to test the new Shelby GT when it came out, before anyone saw one.

“I love racing. It’s time consuming and hard doing it by myself,” she said.

“I don’t do anything else but cars. I don’t drink or smoke, or spend a lot of money on fashion. It’s just cars. I have seven right now.”

'Too many characters': Patty Jenkins turned down Justice League movie

Parrish’s former racecar was a Ford Fiesta (yes, a hatchback) that she used to outdrive a Dodge Viper and a couple of Ferraris.

James Cartwright owner of Hawk Hardware Speed Shop confirmed Parrish’s skills on the track and the pit, “Angie embodies all the very best qualities of the classic car community she is kind and humble and always willing to help others out, but when she gets behind the wheel all you will see is her taillights.  I am glad to call her a friend over the several years I have known her.”

Passing the wrench to a new generation

“I get asked a lot, being a girl – did your dad do it?” Parrish said. “But I suppose, it’s the same as with a guy, you just love cars if that is your thing.”

Parrish also loves the chance to share her passion for cars when she can. She taught a lady’s automotive classes and auto body classes.

“I love seeing girls get into it now. They’re seeing that it’s OK if you want to go into it if that is you passion,” she said.

“I try to mentor as many as can in racing or in the automotive interests,” she said.

“I get asked that a lot. I’ve been in the car world showing cars, racing about 30 years. I’ve always had a passion for it. I like the engineering of them. I think of cars as part art and part engineering. It’s good therapy for me working on one. It’s like when an artist is doing their thing. You just get in that zone,” she said.

And there are the people you meet.

“When she gets behind the wheel all you will see is her taillights.”