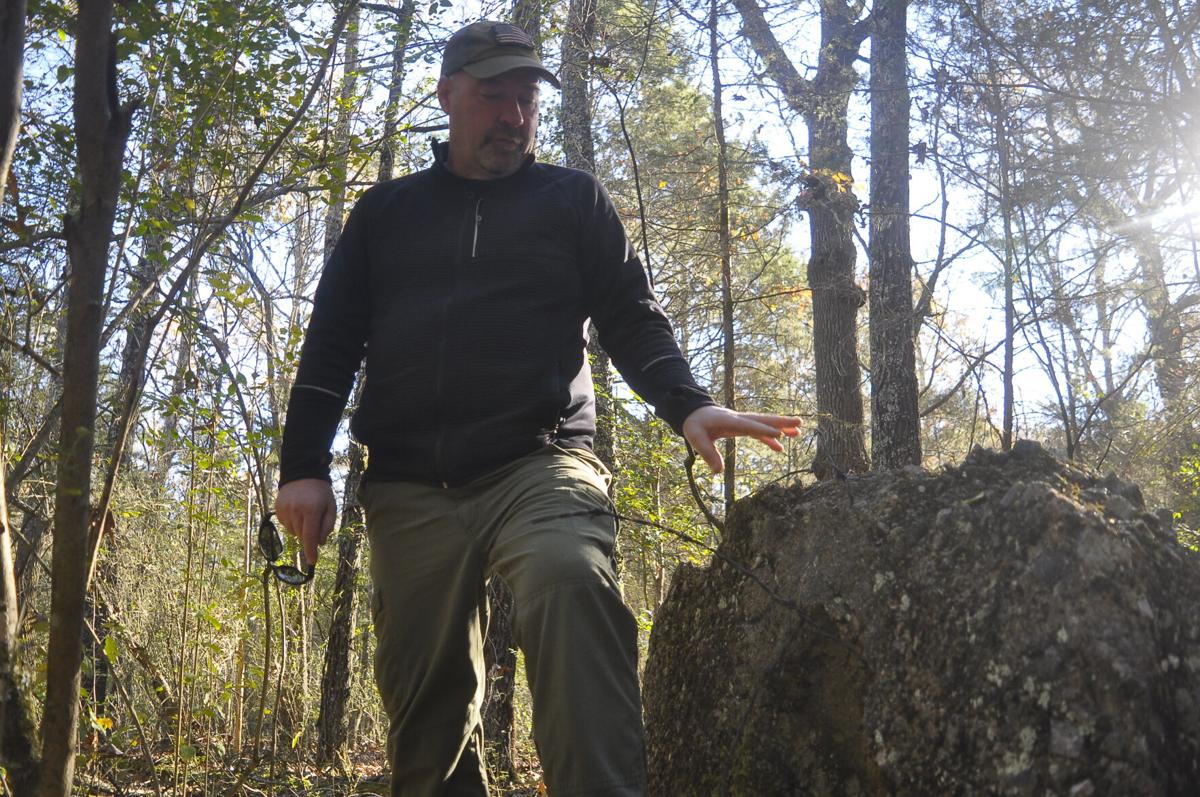 Camp Forrest explorer and historian John Allan examines a concrete pillar that bears the date September 1941 (over two months before the attack on Pearl Harbor). Still bearing barbwire, the tie poll that would been present was part of the fencing that maintained security at the German-American internment camp that would later in the war house prisoners of war. 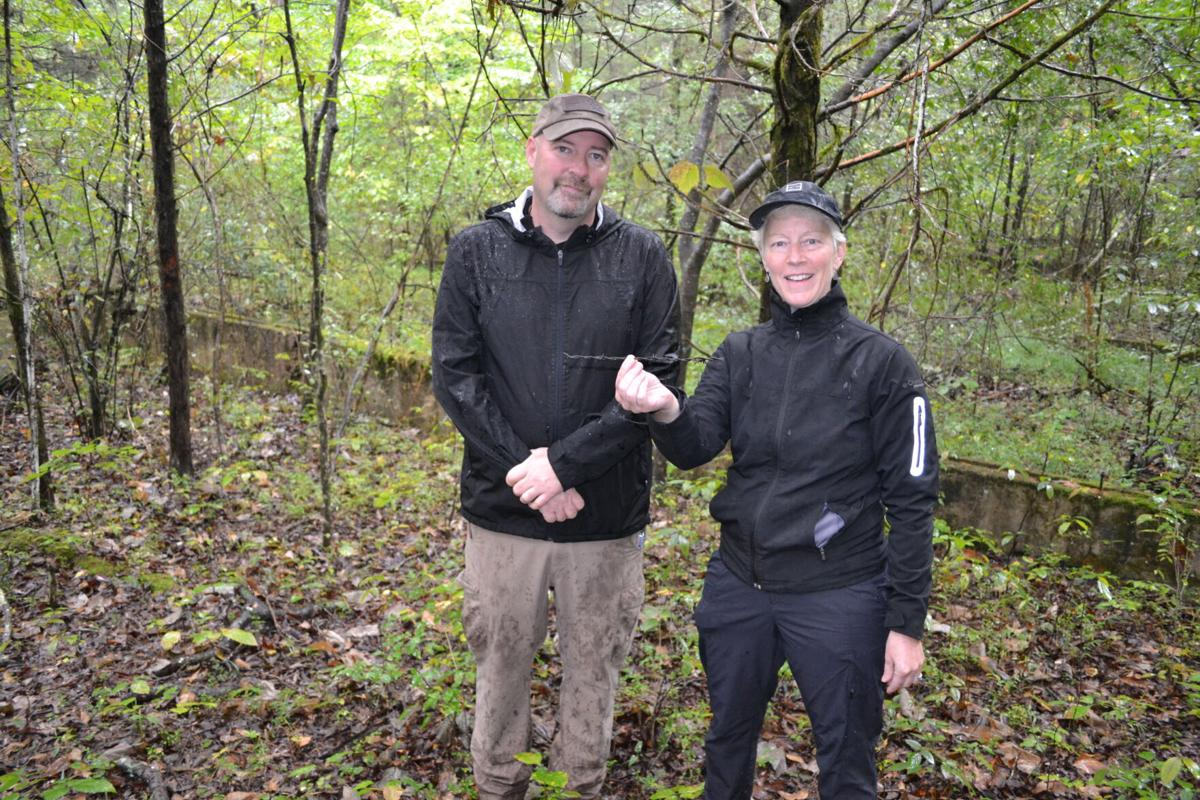 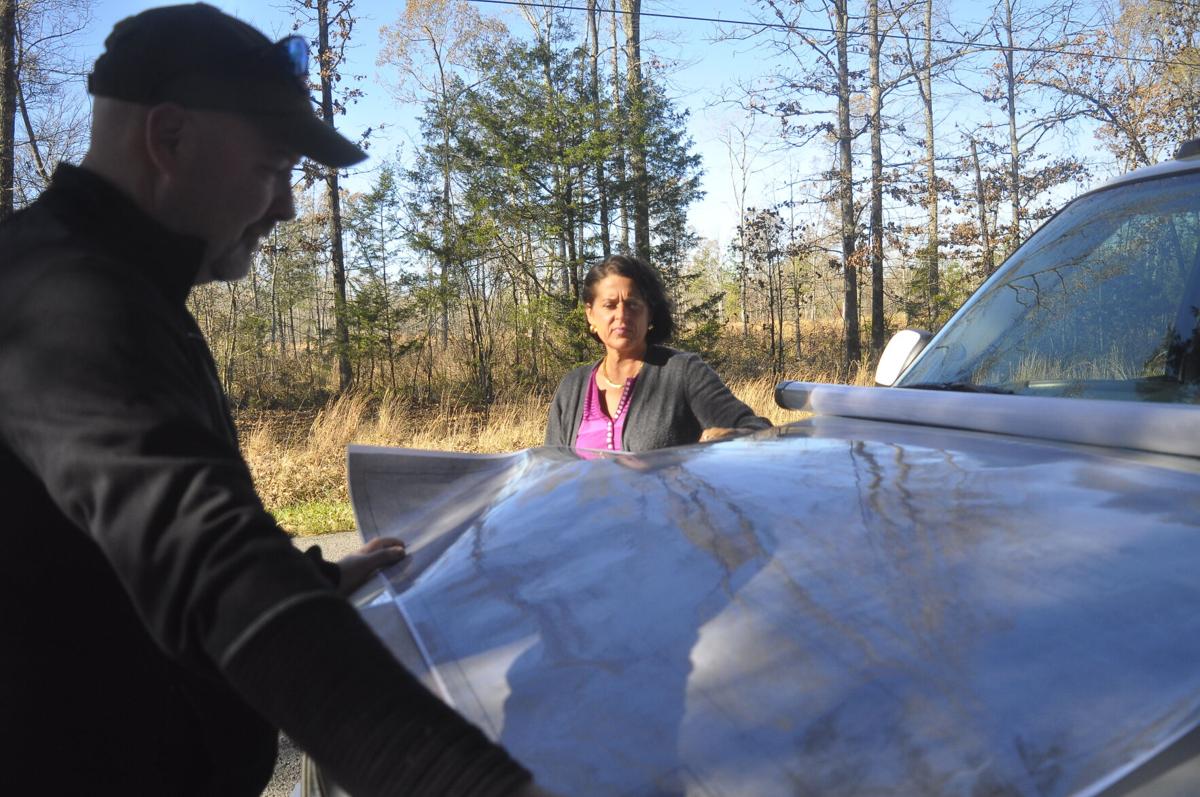 Camp Forrest explorer and historian John Allan examines a concrete pillar that bears the date September 1941 (over two months before the attack on Pearl Harbor). Still bearing barbwire, the tie poll that would been present was part of the fencing that maintained security at the German-American internment camp that would later in the war house prisoners of war.

As Arnold Air Force Base was being formed to fight a cold war, its decommissioned neighbor, Camp Forrest was sold for salvage to be reclaimed for reuse. What was left over was deserted to return to its natural state following World War II. Written records survive from the base that during World War II was the fifth largest city in the state and home to over 200,000 service personnel plus POW and internment camps.

Yet the brick and mortar, concrete and barbwire, Camp Forrest is a dying memory in the minds of those who saw it. To a new generation of enthusiasts, it’s a place where memories and relics meet to fuel their research.

“For so many years, no one even knew where the main gate was,” said Camp Forrest historian and Arnold Center instrumentation technician John Allen. “The one thing I’ve learned along the way…if you ever get around somebody and they say, ‘No, it happened this way…’ (it) will be proven wrong eventually.”

Recently, he and a fellow Camp Forrest researcher revisited the camp with the Manchester Times in tow.

“This was Gate 3 and the guard shack,” Allan says as he drives down a back road in what is now a Tullahoma subdivision. In the back of his Suburban is Camp Forrest author Dr. Elizabeth Taylor, who wrote “Images of America: Camp Forrest,” “Voices of Camp Forrest in World War II” and is working on a third book on the subject.

In the woods behind the car is the physical location of the POW hospital where Axis solders recovered from battle wounds, some likely inflicted by the Americans who trained nearby.

“History is like a journey, when you start down it, it’s better to say I think this is this was for. As you go along it shows you what this really was. If you’re passionate about telling the story right…it brings a lot more life to what the story really is,” Allan said.

“There’s nobody to ask anymore. The folks the legends have passed away,” he said. “It’s a shame when people come here and want to retrace the steps that their grandfather or grandmother took, no one can really take them and show them,” he said.

Taylor added that the end goal is to have a Camp Forrest cultural center to help people understand the importance that Camp Forrest and Northern Field (the Army Air Force base located in Tullahoma) locally and globally. Working together, the loose knit group of like-minded enthusiasts has scoured sources from EBay to estate sales purchasing pieces of history that tell the story of the camp.

There’s an urban legion that seems to pop up about a mock German village used to train these Ranger groups. Allan would often ask around about the location, and, at least once, the question brought a scoff by a would-be expert. Pushed by this, Allan was more determined than ever to find its location.

Then he found it.

There are pictures of “Combat City” a live fire range. The true German village was documented in an Army manual, uncovered in Taylor’s research. Sometimes known as “Fuhrer-ville” or “Nazi-ville,” the site so impressed Army brass that the entire Second Army was ordered to be trained in house-to-house urban warfare like the Rangers.

“We found the true location. It wasn’t known until last year,” Allan said, explaining that many of the buildings had colorful names like Butch’s Beer garden and that the chapel’s steeple was even topped with a swastika.

These wooden buildings, like the POW morgue near the hospital complex, have long since been demolished, yet the concrete pillboxes and armaments are still there, pockmarked with bullet holes.

“Time has taken its toll on this area. These are full-scale, full-size bunkers (five feet thick) that they assaulted on them and also shelled them to test to see what our artillery would take to destroy them,” Allan said.

“If you take someone and show it to them, the building tells the whole story,” he said. “I document the location of these sites.”

For all the discoveries made at the camp, there are as many questions left. The Allan and his fellow explorers found at the location of the morgue, a large marble slab that they cannot determine its use.

Taylor was visiting to  research a forthcoming book.

“Being able to see the grounds where soldiers trained (puts) it into a larger context,” Taylor said. “Everything did happen here. (Seeing it) is further validation of the primary sources.”

Or as Allan notes, pointing to a nearby oak, “that tree was here when they were.”

It’s that sense of presence that captures the imagination. Even the trees have a story. Some are reserved witnesses to history, and others boast the scars of graffiti and shrapnel.

One of the attractions of Manchester for locals and visitors is Beans Creak Winery. In addition to the extensive wine list, the winery offers …