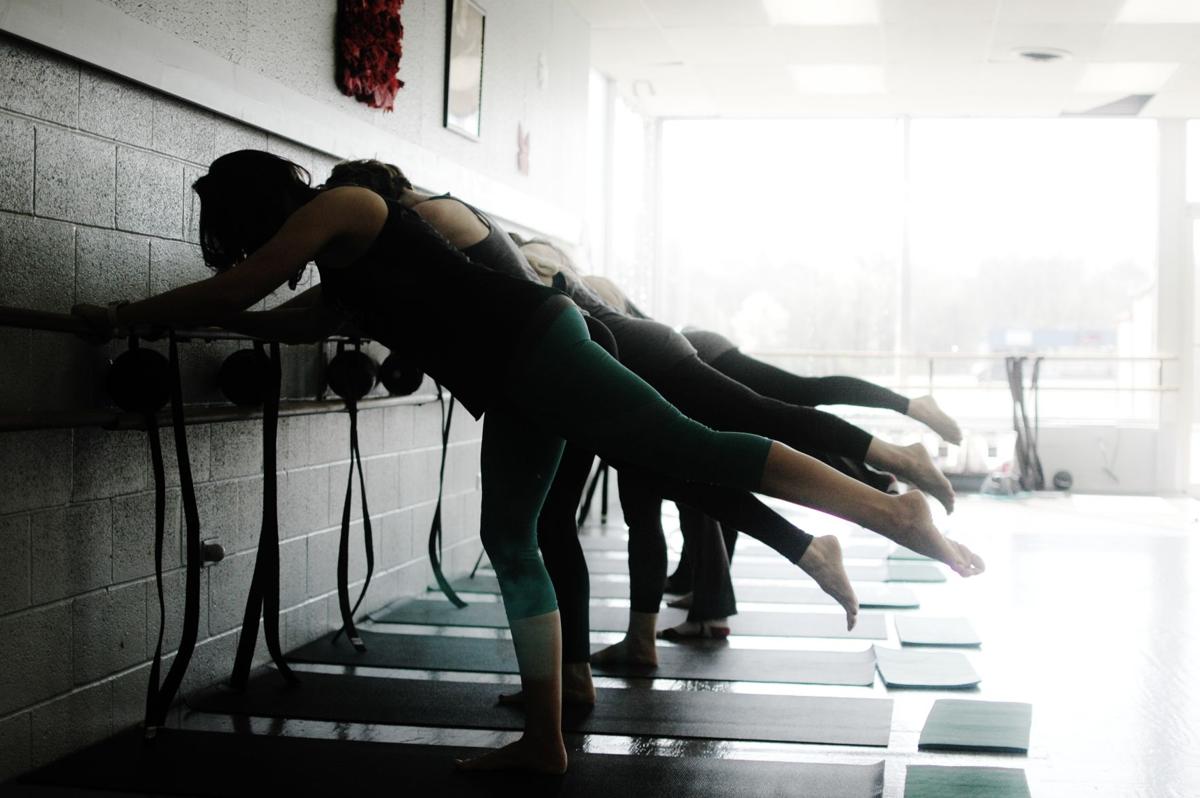 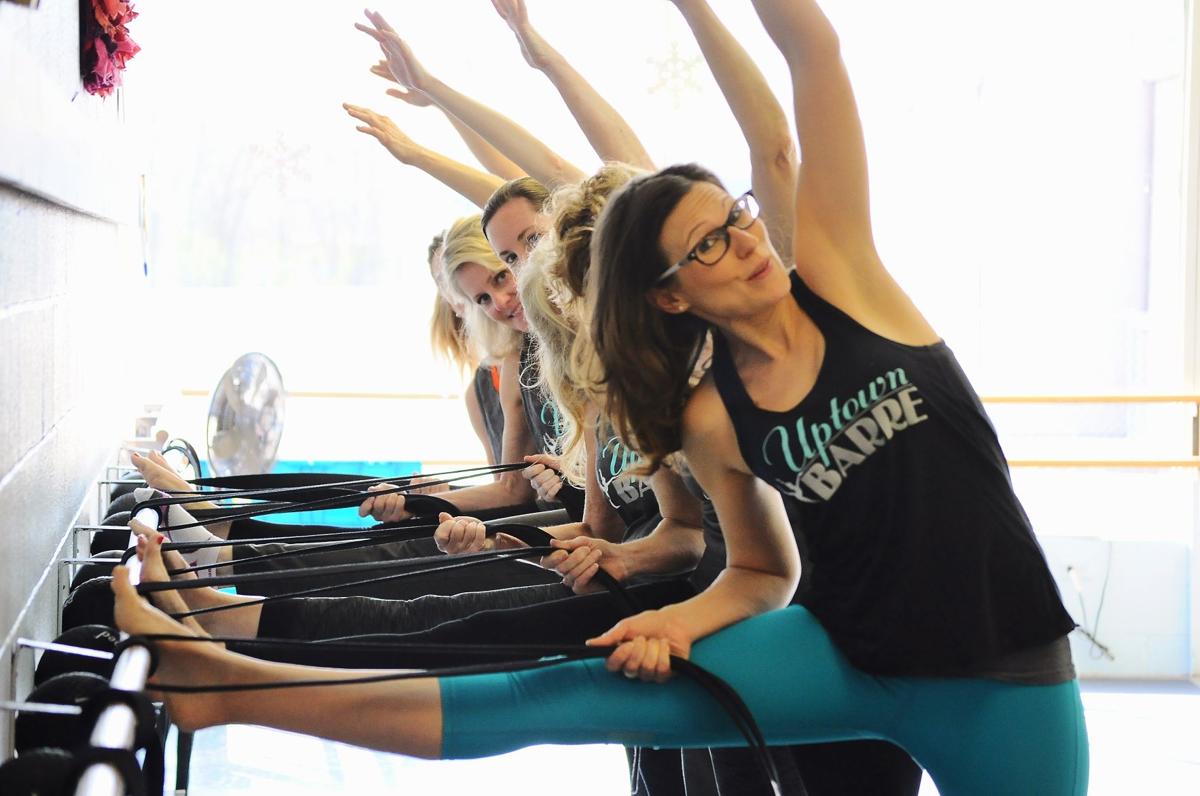 Tullahoma studio offers Barre Amped fitness classes that helps develop your inner dancer’s body waiting to break free Staff Writer John Coffelt     Uptown Barre, one of Tullahoma’s newer fitness studios, offers a unique fitness class that combines ballet poses with other fitness moves to offer flexibility and develop a dancer’s physique. “Everybody seems to love it.  People who try it, seem to come back. It’s low-impact and builds a lot of muscle without a lot of muscle mass,” said Uptown Barre founder and certified instructor Rebecca Layton. BarreAmped, the style of barre fitness employed at Uptown Barre, is a body shaping exercise designed to produce reliable results. It is influenced by classical and modern dance plus draws from Pilates, active and orthopedic stretching. It uses precision-oriented technique to focus on small, isolated movements within deeply held and challenging postures.

The name sums up the experience. Barre, from the static poses and movement of ballet and amped, conveying the focused intensity that is added for visible results. “It has been incredible to see these women get stronger,” Layton said, her passion for the class showing despite just finishing an early Saturday class. “I can visibly see the changes in their bodies. When we come up and go down for that thigh work, I can see the definition through their leotards that wasn’t there before. “There’s so much stretching to lengthen out the muscles. You’re not building thick bulky muscles. They’re long and lean.” The results – the characteristic dancer’s body. Layton explained that while it’s not a dance class (and, no, there’s not tutus), some of the positions are direct carryovers from dance. “It’s the core of ballet. A lot of the positioning is from ballet. In class I’ll say ‘down, down’ (getting the class to dip) but those are just pliés,” she said. “When you take a ballet class, at the beginning is the basic: the barre work. That’s the foundation that leads you to the movement. We don’t really do the actual steps.” There are weights at the start of class, but the one pound weights are for toning. “They are light weights with lots of reps, so you get the toning. We also have pushups, the classic, which helps build your core and arms.” The only other equipment used is a stretchy band, a small playground-style kickball, a yoga mat, and the namesake ballet barre. Layton’s favorite part of the class is the under-the-barre work. That’s where the class’s benefits really shine. Under-the-barre work targets the deep core muscles that are missed by doing many ab workouts. “I had a back injury while doing yoga and realized I was doing things wrong. [In rehab] I had to do a lot strengthening my deeper core muscles.” Layton explained that the deep core is the transversus abdominis, below the “six pack abs” that everyone is doing crunches for. “The deep core is the core muscles that stabilize your spine. We’re strengthen those muscles.” The core work is remarkably similar to the exercises that Layton did in physical therapy following a yoga-class back injury. “Multiple physical therapist told me that these are the one that need strengthening. People doing crunches and other ab workouts miss these muscles.” People with weak deep core muscles are more likely to injure their back. Layton’s back injury gave her a firsthand perspective on fitness-class injuries, and how important it is to prevent them. “It’s my job to go around to each student and make sure that they have their postures correct. I’m constantly giving them cues, ‘Make sure your shoulders are down, make sure you’ve gotten that core zipped up nice and tight.’ I’m verbally cueing them the entire time and then I tactile correct them. If I see someone is in wrong form, I immediately adjust them. “I don’t want anyone to get hurt like I was.” She said that it is very common to see people who have learned to do planks or pushups wrong. “I stop them. I hope I don’t embarrass them, but I want them to get strong in the muscles that they’re supposed to be working.” Overall if it’s not fun you probably won’t stick with it. Barre is fun (I tried the class a few weeks ago.) “You enjoy it, but you know you’re working hard,” said barre student Robin Morrison. “The first time you feel like you’re not going to make it through this class. Then all and the sudden, it’s over. (Pretty soon) you don’t want to miss,” she said. Every class you feel the good it’s doing for your body.” Miriam Majors added, “You’re never not sore, but it’s a good sore,” “I’ve done it all, and I like this best.” Layton said that classes offer that advantage over DVD’s or YouTube classes. “If you’re being taught by a certified instructor, they can really critique what you’re doing.” Layton said that at the beginning she was trying barre online, and then sure enough, when she got to class her form was off. “I’m pretty aware of my body position, but it just helps to have a second pair of eyes. There are so many of our postures – if you’re leaning forward, how do you tell if your hips are out or up?” When Layton moved to Tullahoma from east Tennessee, she noted that there aren’t a lot of options for a boutique-style studio. What are available are often hard on the body and are designed to bulk you up. As a physician’s assistant, a lot of the conditions that Layton finds in patients are related to weak abdominal muscles. “I saw so many women with what we call pelvic floor issues. All of that is [connected] to muscles that can be worked.” Layton researched barre programs to see what master instructors thought about how well their programs work the pelvic floor. They relayed how some of their students had bladder issues clear up and actually canceled surgeries. Layton studied under Jen Williamson Ashcraft who operates Barre 11 studio in Murfreesboro, and who learned directly from BarreAmped program founder Suzanne Bowen. “(Ashcraft) took me under her wing and showed me the ropes. I was very fortunate that she was just right here.” “I just want people to stay healthy and active and prevent injures I think this method of exercise does this because it focuses on pure technique, something that a lot of exercises don’t.” Layton recommends downloading the MindBody app on Droid and iPhones to schedule, pay for and get alerts about upcoming classes. Layton in turn is alerted to how many students will be attending a particular class and have that number of mats out. Uptown Barre is also online and on Facebook.    UptownBarre is located at 322 West Lincoln St. in Tullahoma.