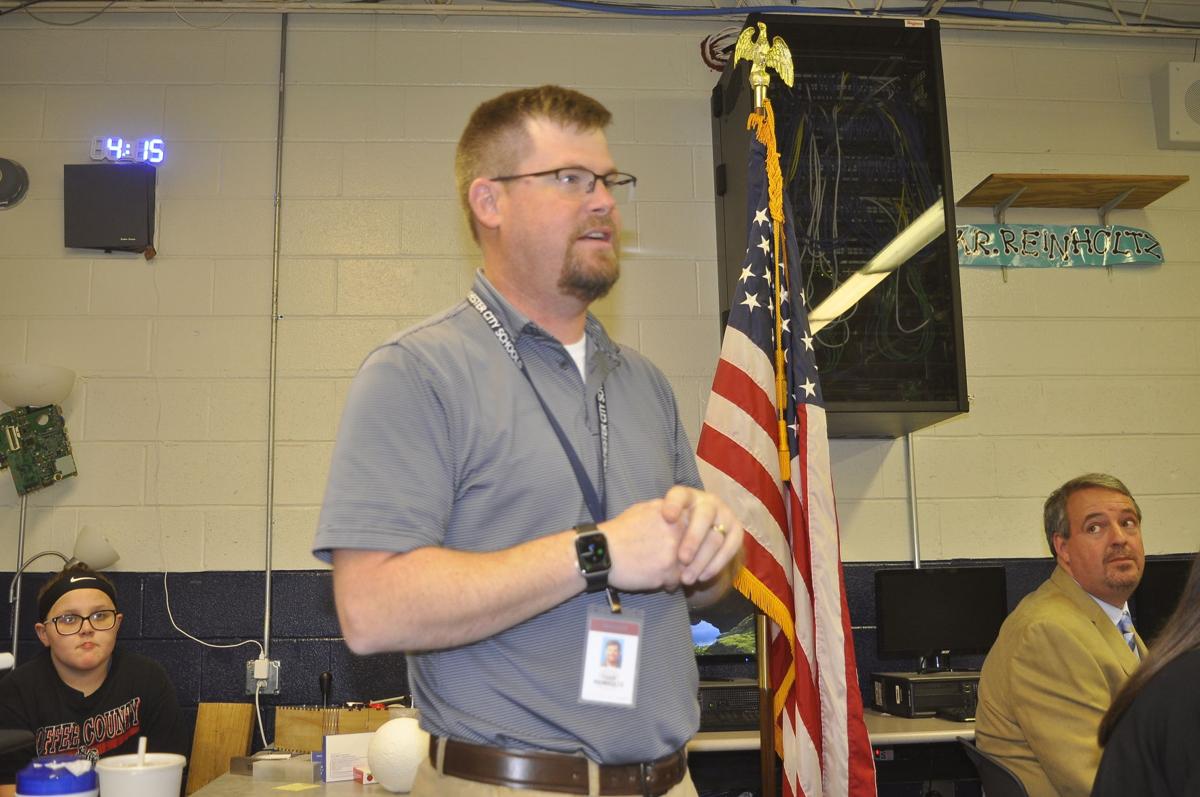 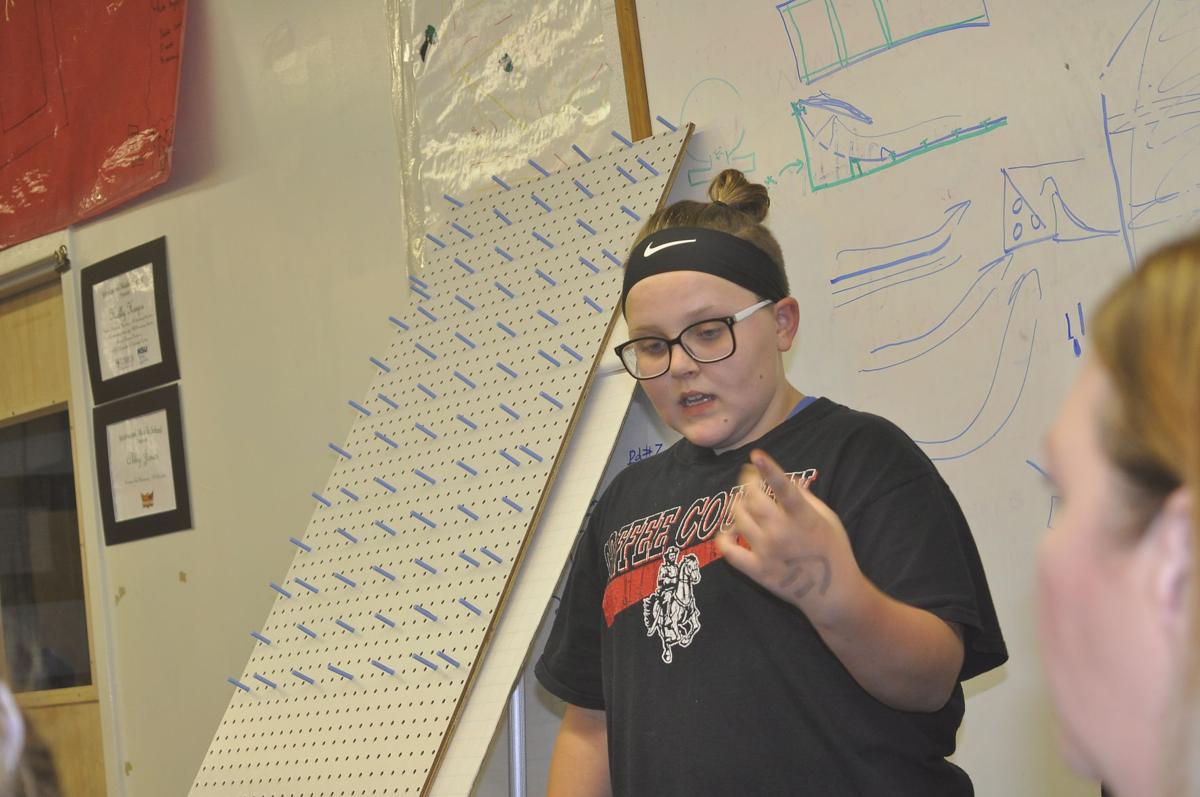 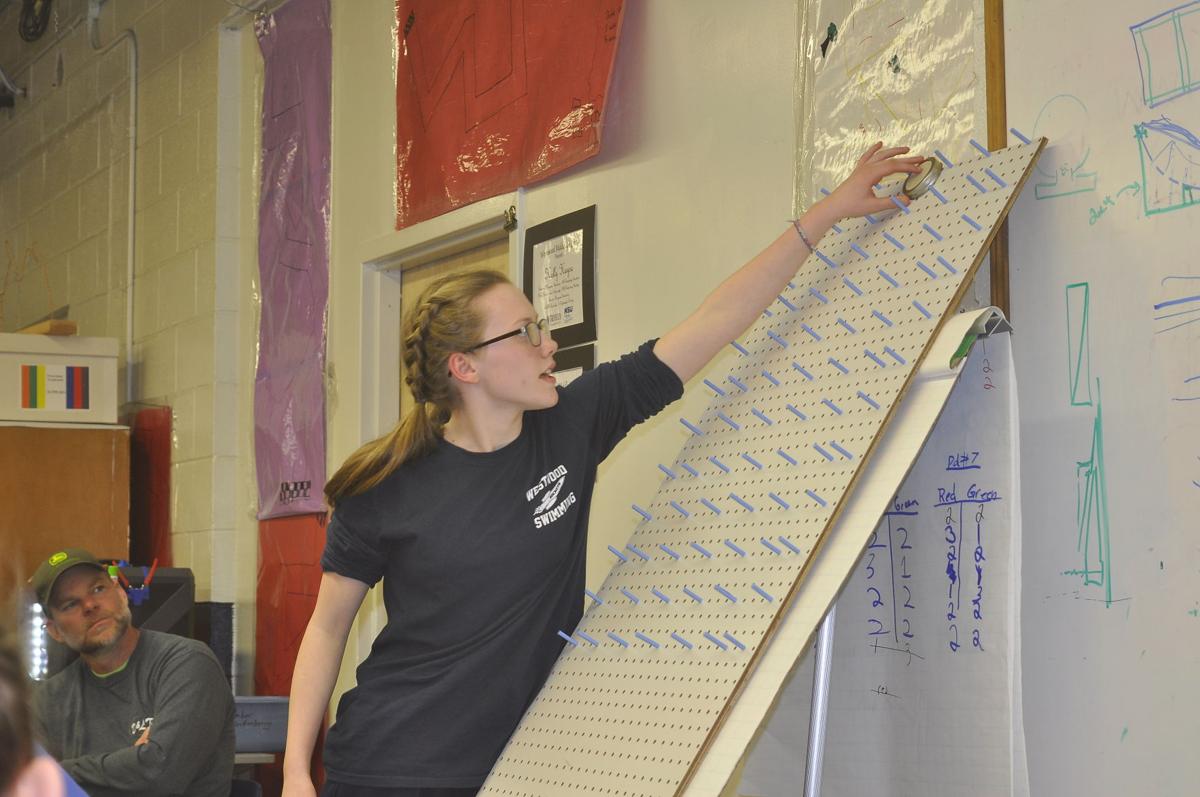 Seventh grader Abby Gilday demonstrates the Plinko project during the March meeting of the Manchester Board of Education held at Westwood Middle School’s STEM lab. 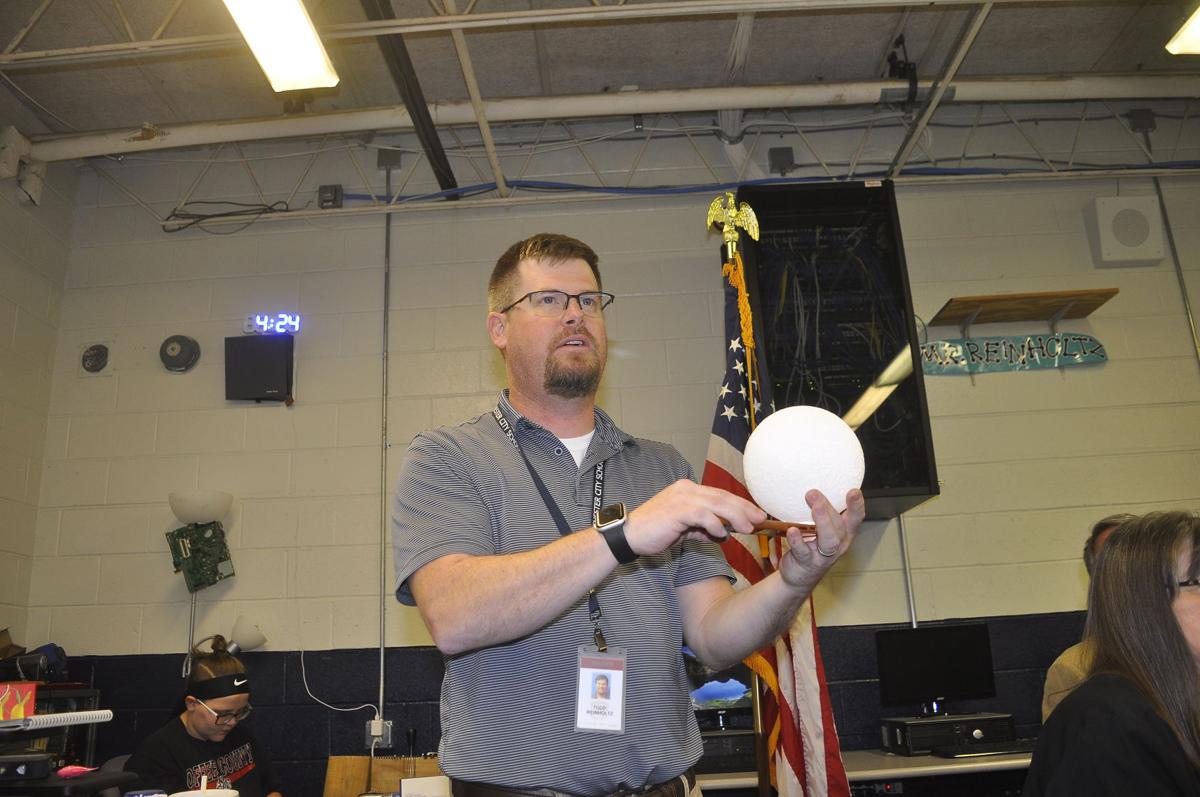 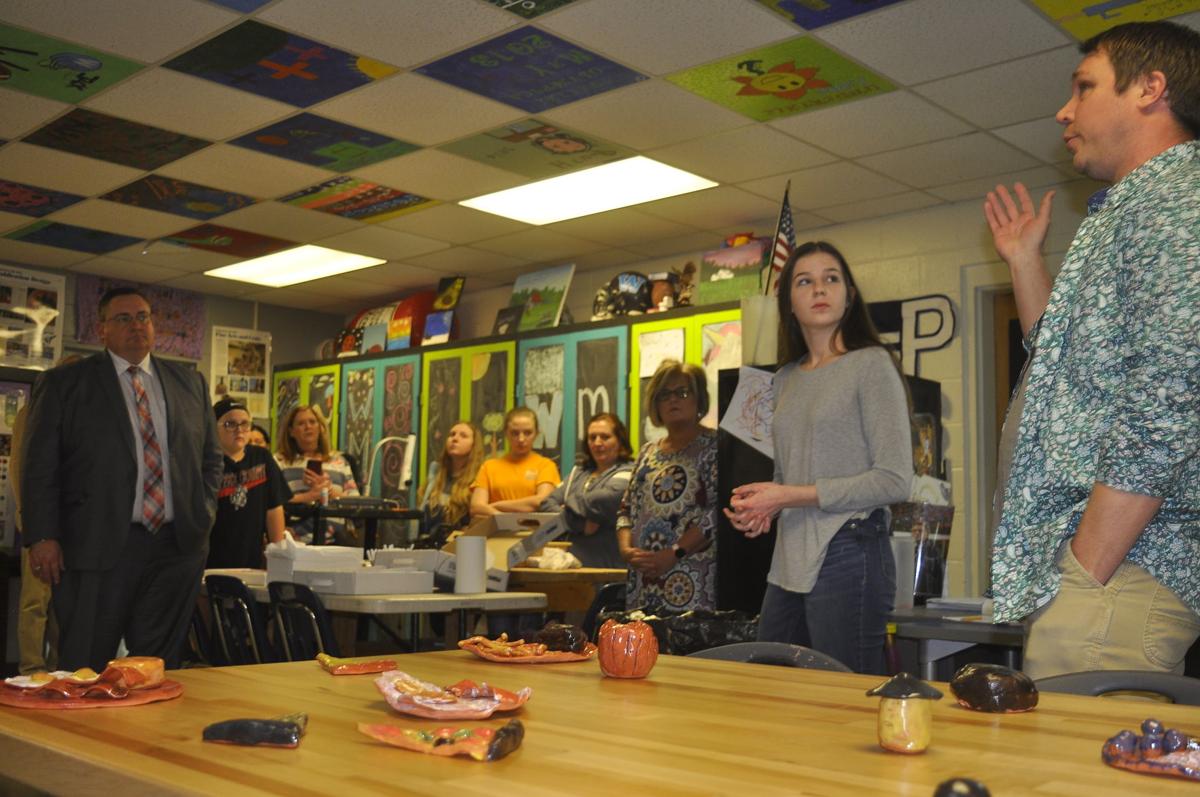 Visual Arts student Malory Freeman explains some of the class projects during a school board tour of the classroom. 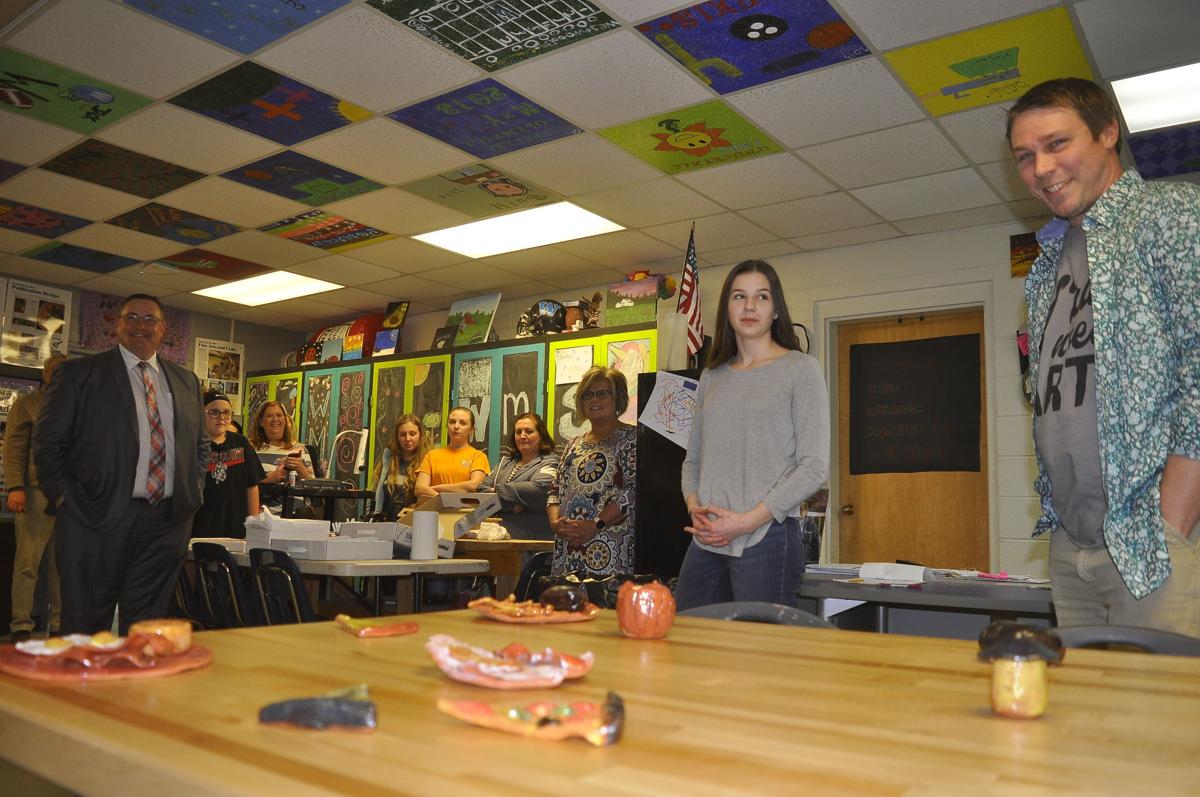 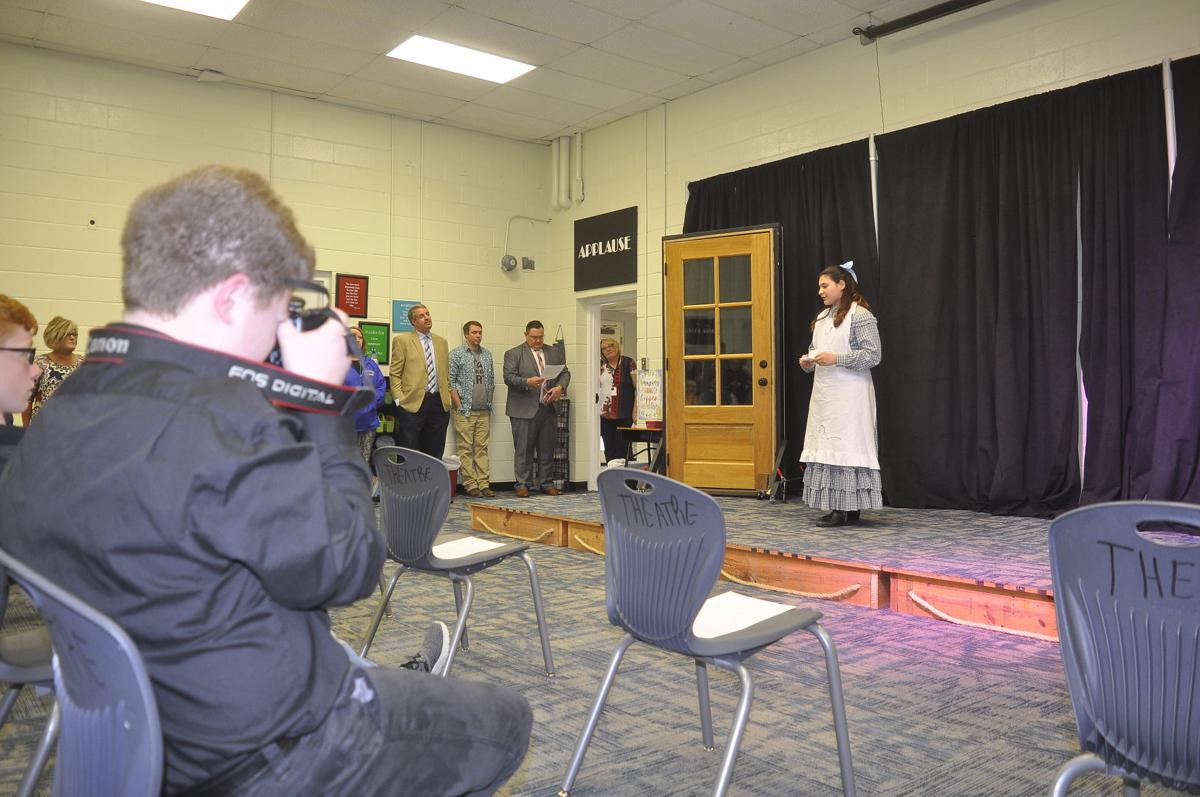 Theater I student Sarah Kahn performs a scene from “Anne of Green Gables” for the March school board meeting. 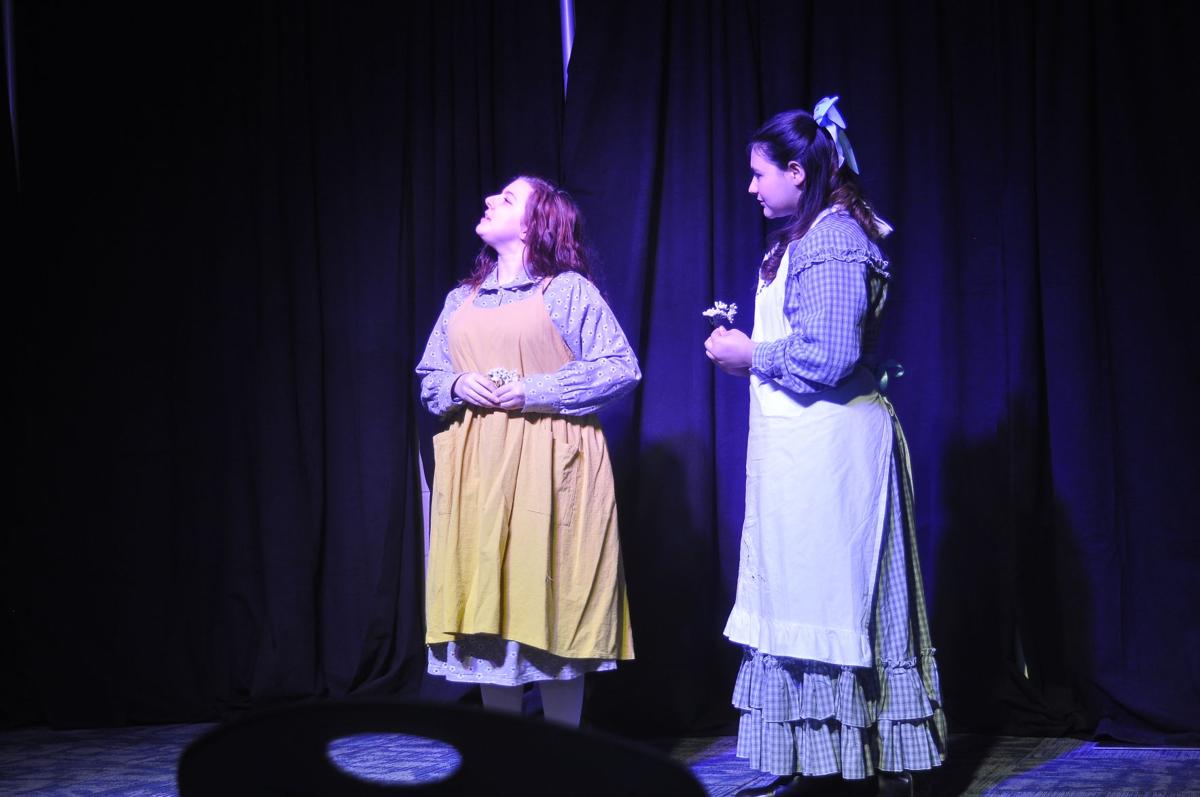 Seventh grader Abby Gilday demonstrates the Plinko project during the March meeting of the Manchester Board of Education held at Westwood Middle School’s STEM lab.

Visual Arts student Malory Freeman explains some of the class projects during a school board tour of the classroom.

Theater I student Sarah Kahn performs a scene from “Anne of Green Gables” for the March school board meeting.

Schools don’t use chalkboards anymore, but even if these relics were still commonplace, there would not be any dusty lectures to be found in Westwood Middle School’s revamped related arts program.

“We are very excited about our related arts schedule,” said Westwood Principal Julie Miller during a school board meeting at the school that showcased students’ efforts in these classes.

“These teachers do an amazing job incorporating curriculum into their own standards. They have standards from the state of Tennessee as well as incorporating core academics.”

“The crew of kids that I have – I feel very, very blessed. We are a wild and crazy room. We make a lot of noise… the square pegs,” Reinholtz said during the presentation.

“I like to give the kid’s real world problems to solve.”

One project for an eighth grader to solve is to devise a method to make his overhead projector remote unlosable.

“They are in the process of making a 3D sleeve for the remote control that will glue to the wall that has a retractable string that attaches, so that I can’t even walk away from it,” Reinholtz explained.

Reinholtz is the vice president of the board of directors for the Hands-on Science Center in Tullahoma and helped write the computer science standards for the state of Tennessee, so he knows his science but it’s that making-learning-fun aspect that pushes the students to excel.

“STEM is about a growth mindset. Failing, messing up – it’s OK. What are you going to do next? It’s about not quitting. We want to have the kids struggle,” Reinholtz said.

“We’d rather them struggle and learn not to give up here than when they’re in the real world.”

STEM is also about the process not the product. What did they learn, not does the gizmo work? But it’s great when the project works.

One of the projects profiled at school board meeting was a seventh-grade project that requires student to make a classic carnival game from found materials as a prototype. Then they digitize the model in the final design. One group used pegboard and dowel rods to make Plinko board. To digitize, the group will make the game keep score. The jar lid puck will connect a circuit when it reaches the bottom of the board. A computer program will be written to keep score.

A second game is a take on Dance Revolution that requires the students to construct stomp pads from cardboard and aluminum foil. The group is still working on the coding for scoring.

“One thing I liked about this project is that they didn’t give up on the switches,” Reinholtz said. “They were really stumped; the delay was giving false scores. (They arrived) at a really elegant solution.”

A basketball game, complete with a real hoop mounted to the STEM lab wall scores hits with sensors built from a pizza box stomp pad.

“Every day we don’t know what’s going to happen in here necessarily. We start with a broad framework and go from there,” he said.

This year’s class consists of students gifted in science and math who responded to a survey distributed to the student body. Next the class will move from the pilot phase to a general nine-rotation to include all students.

Visual arts classes tackle a range of art media from ceramics and pointillism to even some murals painted around campus.

“One of our major projects is pottery,” said art teacher Will Pannell. “It involves a lot of chemistry. It works well with the seventh and eighth grade science curriculum. That’s something we’re very proud of.”

Bonnaroo grants have funded the kiln and pottery wheel for class.

“We’re very lucky to have them,” Pannell said. Pannell wrote grant proposals for the pottery equipment a few years ago.

There are five wheels for the classroom.

The pottery complexity and method grows as each student progresses by grade. The sixth graders do pinch pot pottery containers by hand. The seventh graders do a slab building (like building a gingerbread house from rolled out components. Then the eighth grade graduates to a pottery wheel.

Eighth grader and budding artist Malory Freeman described to Monday’s meeting some of the class’s projects.

“In Art 1, we do a lot of individual art projects. We do the clay and paintings as individuals and we’ve done some group projects,” she said.

The high school-level class has painted murals on the walls of the computer and band rooms, a Wounded Warrior project disabled veteran parking spot and Rockets-themed art in the lobby.

“We painted a rocket on the wall near the entrance to the school,” she said.

Pannell has started a tradition of painting a row of ceiling tile each year.

“We’re two or three years into it now. Hopefully, if I’m lucky enough and healthy to continue up in 15 years, I will have all the ceiling tiles completed in the cafeteria,” Pannell said.

“I’m very proud of what the kids do. I hope it’s an enjoyable class that’s a little break from the rigors of math, science, English and history, while we are able to be very productive. We’re able to go across curriculums and work with others,” Pannell said.

Of all the related arts programs at Westwood, the music program is one of the oldest.

“The Westwood Singers was founded years ago,” said music and band teacher Landon Spangler. “My father-in law was a Westwood Singer. It was something that we brought back and are really proud of.”

Spangler explained that Theater 1 and Art 1 are offered to the most advanced and talented students in those fields, while in the music department the most advance students are in band and choir.

The high school level music class is for those students looking for a high school credit, but is perhaps not the strongest musician.

Westwood Singers is an afterschool program, filled by auditions. The group performs as an outreach to assisted living and community events.

The Westwood Singers performed “Hallelujah” for the board.

Lacking the confidence to speak before a group can be huge disadvantage in one’s career path. A gifted speaker can inspire a room. The Speech and Theater Program at Westwood offers students the tools excel before a crowd.

“Speaking as a parent,” Chairman of the Board Travis Hillis volunteered, “This class helps his ability to speak in front of folks and be more confident.”

Speech and Theater is on the nine week rotation and covers orientation into public speaking. Covered subjects range from making eye contact in conversations to the elements of speaking.

Theater I is a high school credit course goes far beyond that level to expose students to a variety of theater challenges from performing and choreography to lighting and costuming.

“I have opened up more,” said Shannon Reed in a handout that theater teacher Karen Lewis prepared. “I am more confident in my own skin. I am comfortable in a crowd. I have made a new family that boosts my confidence.”

Melisa Garcia writes that “Theater 1 has helped me grow as a person and a student. I learned that I have become more confident in myself because I’m surrounded by people who push and support each other to step out of their comfort zone. I find myself participating even more in other classes that before being in Theater 1.”