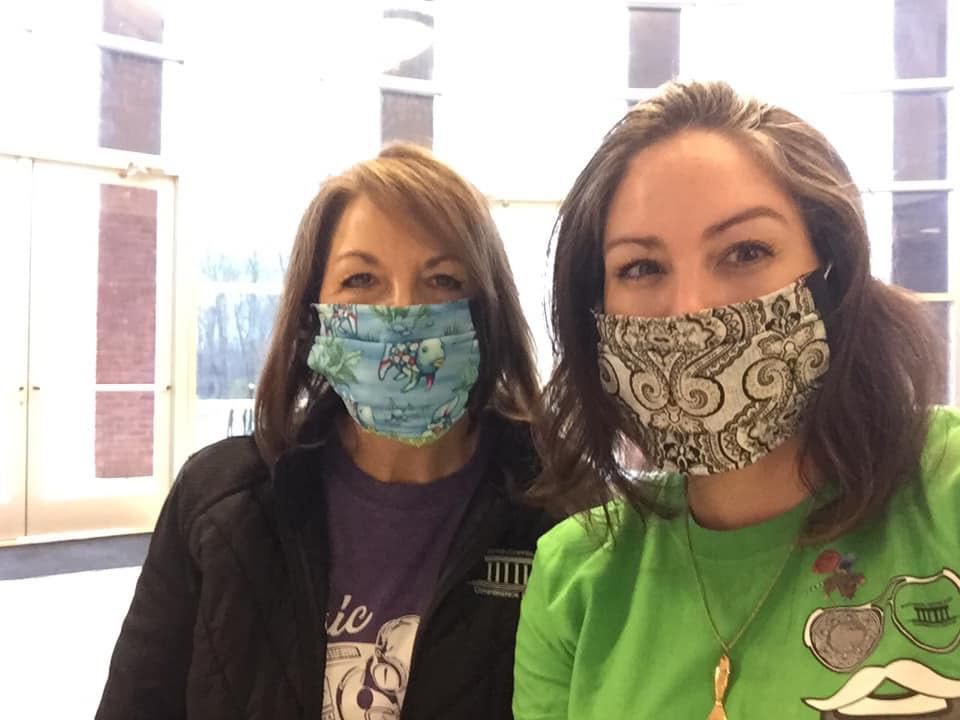 Pictured are Sheila Carter, left, and Rebecca French, who made 42 masks for medical personnel in the area and eight masks for non-medical personnel. Horizon Health, Compassus Health, Dr. Jay Trussler’s office and Manchester Medical have received masks. Masks have also been given to elderly citizens for going to doctor’s appointments or to people working in pharmacies. 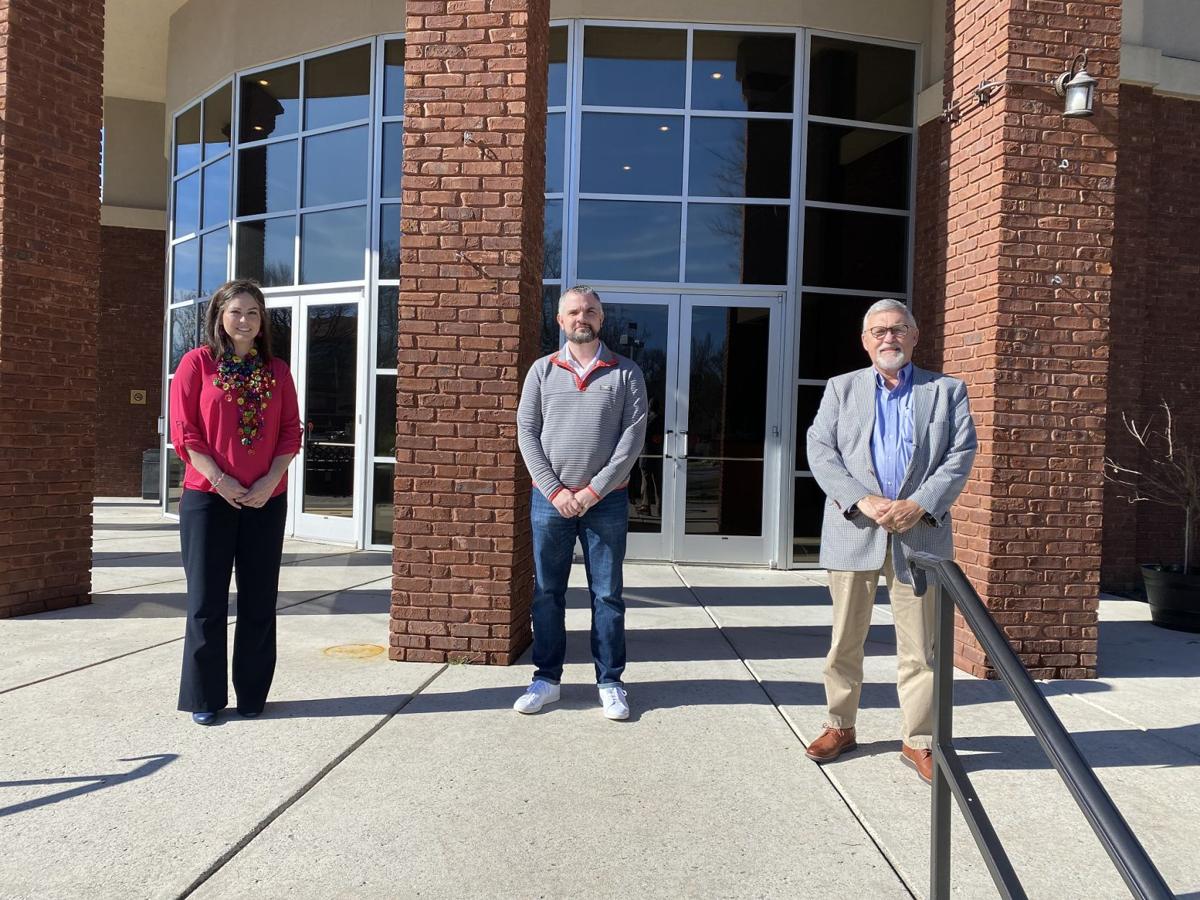 Pictured are Sheila Carter, left, and Rebecca French, who made 42 masks for medical personnel in the area and eight masks for non-medical personnel. Horizon Health, Compassus Health, Dr. Jay Trussler’s office and Manchester Medical have received masks. Masks have also been given to elderly citizens for going to doctor’s appointments or to people working in pharmacies.

As the Covid-19 pandemic continues across the globe, some businesses have been impacted negatively. Restaurants have had to switch to a pickup and drive-through model. One industry that is hit the hardest by the pandemic is the hospitality industry. As travel restrictions are being encouraged, and in some cases, enforced, hotels and conference centers have been essentially deserted. Without customers to support their operations, it is difficult for these organizations to continue paying their hourly employees, leaving many having to file for unemployment. This situation is becoming common nationally, however. As of March 26, the number of Americans filing for unemployment is at the highest it has ever been, eclipsing the previous record set in 1982. While this period of economic shutdown is nearly unprecedented businesses like the Manchester-Coffee County Conference Center are doing their part to try and help the community during this time.

“We’ve never seen anything like this before,” Chairman of the PBA Stan Teal said. “We were fully booked for the rest of the year, and several groups have had to cancel due to the pandemic. We were going strong at the beginning of the year and this came out of nowhere.”

General manager of the conference center Rebecca French worked in the medical field before taking over the general manager position and she echoed Teal’s sentiments, “this situation is unprecedented, and I have never seen anything like it.” French continued, “We have had to reschedule over 47 events so far to a later date in the year.”

The cancellations and moving of the dates happened almost immediately after the first Covid-19 diagnosis hit in the states. With these cancellations the conference center has had to operate with a skeleton crew. This limits the number of employees having to come in from other counties and helps to limit costs in a period where cash flow is limited.

“It’s tough for the employees,” French said. “When you do hospitality work it’s almost abnormal to go home. When I talked to the employees about the situation many of them asked if I was sure that I wanted them to head home.

“We’ve had two meetings with the employees letting them know updates and how to file for unemployment. If they need any help with the filing, they can ask me, and I try to be as transparent as I can about the situation. I hope they come back after everything returns to normal. Working with all the companies that the conference center does many of the employees get offers to come and work for them. They are fantastic.”

Zach Lowry, secretary/treasurer for the PBA, also noted how valuable the conference center’s employees are.

“The employees are constantly being praised for their work during events by all involved. It wouldn’t surprise me at all if they were offered other work from someone they met during the downtime, but I do hope they come back.”

Teal was also in agreement saying that “Rebecca has a very committed group of employees.”

With new information coming about the virus daily, some groups cancelled later than others and due to this the prep had already been done for some of the events.

“One international group cancelled a day prior to the event taking place,” French said. “We had already prepared all of the food, so we donated it to the local senior center. We didn’t see any need for it to go to waste and we know that the elderly are some of the most vulnerable during this time.”

That was the last event that had been prepped for prior to the rest moving the dates back. With all the extra time though, the conference center is shifting into helping the local doctors.

“We have started sewing medical masks to help combat the shortages,” French said. “I hate being idle so I thought this might be a good way to help. The CDC has the pattern on their website that anyone can use, so we are making those while doing maintenance around the center.”

The center has always wanted to help the community, said Teal.

“We always want to serve the community and to help,” Teal said. “This situation has allowed us to continue to do what we always have, and we will continue to do so even after things have calmed down.”

While the Manchester-Coffee County Conference Center is closed to the public for the moment, French and her team have been working on marketing material that will be released as soon as the center is back open.

“It’s really hard for hospitality in general right now. Nashville was hit the hardest by this, and we feel for them,” French said. It is unclear when everything will return to normal, but she added that “this too will pass.”

Preparedness is on everyone’s mind, and as officials urge Americans to self-isolate, the fea…

Local businesses continue to serve their customers. With the Covid-19 raging, businesses hav…

Covid-19 outbreak is hitting organizations and businesses. And while those groups suffer los…

‘I sew and saw a desperate need’

Manchester resident Cindee Batey is not simply waiting for the COVID-19 outbreak to end. She…

Unity has tested 33 patients for COVID-19

Unity Medical Center has announced that as of today, March 25, the center has tested 33 pati…

‘Marching over this obstacle’

The COVID-19 outbreak has impacted every individual and organization, and local businesses t…

Today, March 25, the Department of Human Services is announcing assistance for families who …

With the recent announcement that Coffee County schools will be cancelled till at least Apr.…

Trussler: Covid-19 is in Coffee County and Grundy and Franklin County

The Covid-19 virus, also referred to as the coronavirus, has begun to infect the United Stat…

While schools are closed during the COVID-19 outbreak, local teachers continue to care for s…

The Manchester City Finance Committee met Oct. 28 in a special call meeting to recommend how…

Local businesses that keep the local economy fueled have been brought to their knees. But the community can help.

While social distancing is required to curb spreading the virus, the community aims to stay together through online groups and activities. Man…

Spring Street Market continues to serve the community during pandemic

With the Covid-19 pandemic ongoing, people had to change some their daily routines. Changes, such as changing hours, social distancing and non…

Jayla Ross celebrated her birthday without the typical party this year.

Manchester resident Jessica Meeks, who works as a nurse at the Coffee County Sheriff’s Department, is not taking care of people only when she’…

As the Covid-19 pandemic continues to rage more businesses have shifted their hours and practices to accommodate the public. Prater’s BBQ has …

Members of the Public Building Authority reminded Coffee County officials on May 5 that the county is late sending monthly reimbursements, whi…

What should county and city officials do when the contract between Coffee County and Manchester City regarding the conference center expires in 2021?

Attorney issues opinion about paying for deficit of the conference center

Coffee County Attorney Robert Huskey has issued an opinion regarding the contract between Coffee County and Manchester City, which outlines th…