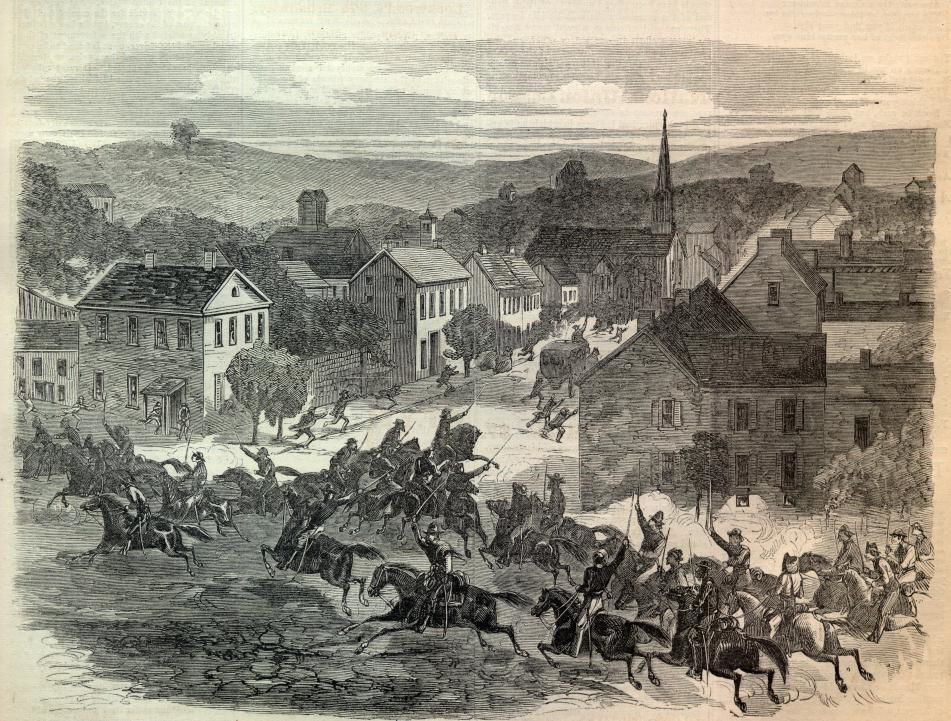 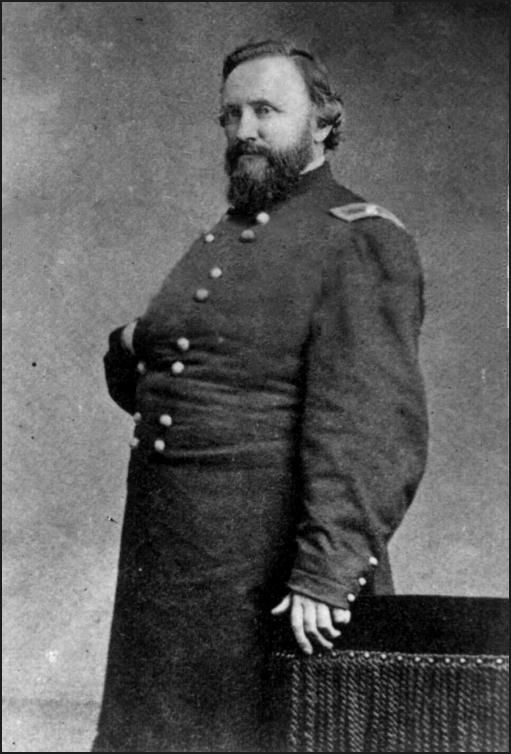 By Thomas P. Lowry Samuel H. Anderson, Assistant Surgeon, 4th Kentucky Cavalry (Confederate) seemed more interested in killing people than in healing them. Confederate Gen. John Hunt Morgan’s “Great Raid” in the summer of 1863 included a scouting expedition into southern Indiana, commanded by Capt. Henry Hines, of the 9th Kentucky Cavalry. Hines’ eighty-man company, dressed in Federal uniforms (a good way to get hanged as a spy) was quickly detected and was pursued night and day by the Federal cavalry and Union home guards. Days in the saddle without sleep soon had the skin sloughing off the men’s swollen legs and the horses stumbling with fatigue. Staggering back to the north bank of the Ohio River, most of the men surrendered. Hines swam the river and escaped into Confederate territory. Among those captured was a 32-year old man with black hair, dark eyes, and dark complexion, five feet nine inches tall. This was our Dr. Anderson.

Anderson first appears in the Union records in a memo dated July 3, 1863, sent by Brig. Gen. Jeremiah T. Boyle  to Col. “Mark Mundy” (probably Marcellus Mundy, 23rd Kentucky Infantry) commanding the post at Louisville. “You will send to the commanding officer, Cincinnati, Ohio, under charge of a trusty non-comd. Officer, Samuel Anderson, Asst. Surgn. 4th Rebel Kentucky Cavly. captured at Leavenworth, Indiana June 12th in company with Hines’ band of guerrillas, to be forwarded into Confederate lines. You will send with him a statement of the facts of his capture.” Anderson was “forwarded” in a very circuitous manner. In late July, he was at Camp Chase, near Columbus, Ohio. In August, listed as “exchanged,” he was sent to Old Capitol Prison in Washington, DC. Two months later he was in prison at Fort McHenry, in Baltimore’s inner harbor. From there he was sent to City Point, Virginia and passed into Confederate lines. December 1863 found him suffering from diarrhea, under treatment at Floyd House and Ocmulgee Hospital, at Macon, Georgia. He seemed to have recuperated quickly and by Spring 1864 was robbing and murdering in southern Missouri. Ten months passed before he appeared next in the Union records, ten months in which he was very active. The paraphrased records of the provost marshal at Rolla, Missouri tell the story. May 2, 1864. From Reed to J. P. Sanderson at St. Louis. Re: affidavits against S. H. Anderson. Anderson was connected with a band of robbers & murderers, his associate [Thomas] One-armed Brown is probably the murderer of Fowlkes. Brown and Bill Wilson, another of the crowd, were two of the worst guerrillas in Missouri. No one will swear that Anderson was present when Fowlkes was killed and Fields wounded, but the evidence is clear Brown and Wilson were both present. Fowlkes and Fields were both quiet, loyal and exemplary citizens; Fowlkes was more than 60 years old. Anderson should be tried by military commission. Of his guilt there is no doubt.2 Reed wrote to Sanderson again on August 15, 1864. Guerrilla S. H. Anderson, confined at Fort Wyman [Rolla] is sick and will die if not removed from the fort. But Rolla hospital is not secure and he will probably escape if put there. “I ask permission to send Anderson to St. Louis.” Seven days later the commanding officer at Fort Wyman was ordered to bring Anderson to the provost marshal’s office in an ambulance, so that he could be sent to St. Louis. That same day, Reed wrote Sanderson again, that Anderson had learned of his sentence [death] and it had “roused” him. “He is clear of fever, still very feeble, and wants to go to St. Louis.” On August 24, Reed wrote to the prisoner, apparently in response to a letter from Anderson, asking Anderson to provide information about the scouting party of which he had been a member. Which men were in the party? Who had ordered the scout? What were the events that ended in Fowlkes’ death and Fields’ wounds? Reed noted that Anderson had written to President Lincoln and that a full report of Anderson’s activities had been sent to the provost marshal general in St. Louis. On September 22, 1864, Brig. Gen. John McNeil wrote to Maj. Gen. William Rosecrans that Anderson’s sentence of death by hanging had been suspended “until further order.” McNeil described Anderson as a leader, not a follower, in guerrilla warfare, and a doctor of high social standing. McNeil thought it unfair that Joseph Johnson, convicted with Anderson, should die, while Anderson should be reprieved. Johnson was an “ignorant dolt,” while Anderson was well educated. Anderson’s death would be a better example to the public. Johnson was hanged December 21, 1864, and his corpse dropped into an unmarked grave.3

Anderson’s trial by military commission, held in June 1864, and filed with Union courts-martial of the war, convicted him of belonging to the guerrilla band of One-Armed Brown. In company with William Wilson and one Copeland, they pillaged and plundered the loyal citizens of Phelps County, Missouri. In addition, Anderson was active with Sonner’s [Sommer’s?] band of bushwhackers, and made threats to kill every loyal Union man he could find. Anderson was sentenced to hang, a decision endorsed by Rosecrans, who then sent the case to Washington, DC for approval. Lincoln’s Judge Advocate General, Joseph Holt, returned the case to Rosecrans advising him that he had full power to execute Anderson, and did not need presidential approval. In the president’s own hand, we see: “View of Judge Advocate General approved. A. Lincoln Sep. 6, 1864.”4 Meanwhile, Anderson, from his jail cell, had sent out a flood, letters, poems, and prayers, most of them addressed to Lincoln. Many of the letters went to Maj. Gen. Grenville Dodge (the future genius of the Union Pacific Railroad) who had assumed command of the Department of Missouri in December 1864. He wrote to Lincoln, recommending that Anderson’s death sentence be commuted to a prison term. Lincoln, like the proverbial man who had failed at throwing away his boomerang, once again had Anderson on his desk. Lincoln’s secretary, John Hay, wrote: “The recommendation of Gen. Dodge is approved. Let the prisoner be confined at hard labor during the war. Feb. 9, 1865.” Lincoln signed the order. Anderson had escaped the noose, but not controversy. In May 1875, State of Missouri vs. S. H. Anderson, was tried in Oregon County. The first degree manslaughter charges noted that “on the 1st day of April 1874 … upon the body of Louisa Seats .. then and there pregnant with a quick child willfully, unlawfully and feloniously and with intent to destroy such child, did use and employ an instrument, to wit, a pair of scissors, and with said scissors did crush the skull of said child .. the destroying of said child not being necessary to preserve the life of the mother.” For reasons related to complex local politics, the prosecutor “entered a Nolle prosequi.” Anderson was off the hook. Mrs. Seats’ motivation in all of this may be explained by her May 1875 divorce from William R. Seats, who seems to have been a violent, brawling drunk. The 1880 census shows Anderson living in Oregon County. He is now age fifty. With him is his wife Sarah, born in Illinois, with four children, including eight-year Margaret, born in Illinois. Did the doctor move to Illinois for a while after the abortion and manslaughter scandal? This is unknown. The Missouri State Medical Society has no record of Samuel H. Anderson. Perhaps future research will shed further light on a doctor who could have been hanged more than once. NOTES

ACKNOWLEDGEMENTS With the considerable help of Lou Wehmer, John Bradbury and Beverly Lowry.