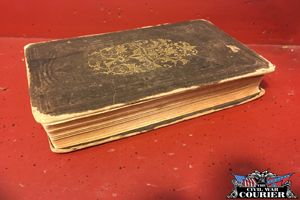 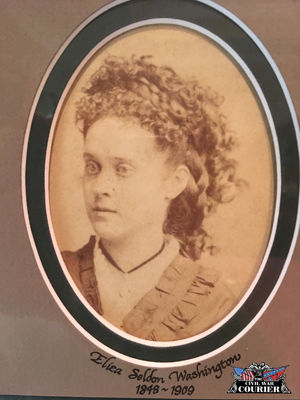 ©Gerald M. Stanglin, Ed.D. Around 1975, I bought a book that I had no idea would enrich my life.  The little book of daily devotions appeared in a book sale in the library at Abilene Christian University at Dallas, a satellite campus of Abilene Christian University in Abilene, Texas.  At the time, I was Assistant Professor of Political Science there.  The books came from the Abilene campus.  My wife Alice has always liked old books so I looked through the old ones for sale and was intrigued by a small book with gold trimmed pages that had some handwriting inside it.  It had the following inscription on the inside front cover:

We placed it with some other old books on a shelf where it remained for several years. Sometime in the late 1970s my wife’s family visited us, including her younger sister Laura.  She was thumbing through the pages of the book of devotions and said, “Do you know what you’ve got here?”  We responded that we just knew it was an old book.  What had caught her attention was writing in the margins throughout the devotional book.  One entry that was long and caught Laura’s attention was one in which Eliza Washington, the owner of the book, described Confederate soldiers firing on a two-story house Eliza was in—owned by a Mr. Packett—on which the Yankees were firing down on “our troops” and the Confederates were trying to dislodge them by firing at the house.  She wrote: Mr. Packett’s house was shelled August 21st 1864.  The whole family including Nellie, Linnie, Lizzie and myself were in the basement.  Eight shells struck the house, one bursting in the room next [to] the one we were in.  After which we were ordered out of the house the firing still going on and were kindly conducted to a place of safety by St. Nichols 11 Vermont Heavy Artillery.  The house was shelled by our own troops to dislodge the Yankee sharpshooters who were firing from the windows and killing a great many of our soldiers.  One Yankee was killed in the act of stealing some things from a lady’s drawer by one of the shells.   We were amazed that we had a book that obviously dated back to the Civil War but we did not follow up on it immediately.  We were the parents of young children and, before the Internet, had no time to do the research necessary to find out who this person was.  However, in 1984, Alice began working in the library at Richland College of the Dallas County Community College District.  By that time, I was a dean at Cedar Valley College, another of the Dallas County Colleges.  She had done a lot of research at home from materials she found at the library and kept me somewhat informed from time to time on what she had discovered.  She had come across a reference or two to Mt. Vernon in the diary and to additional people named Washington.  Therefore, she thought the book might have a connection to our first president’s family and continued to work on it. One day while at work she called me and asked me to contact the Dallas Public Library that had an outstanding genealogical department.  I called and asked the librarian in that department to look up the names of the children of the last Washington family to live at Mt. Vernon.  He was away from the phone for a few minutes but came back and read them out to me.  After reading a few names he read the name, “Eliza Seldon Washington.”  Yes, it was the diary of Eliza Seldon Washington, the great, great, great niece of President Washington, and one of the children of the last Washington family to live at Mt. Vernon. Needless to say, we were both thrilled that we were in possession of such a treasure.  The book is one of daily devotions that she received from Judith B. Alexander upon the death of Eliza’s mother in 1860.  Apparently, this devotional book became very precious to Eliza beginning with her entry in October 1860: “The Lord gave and the Lord hath taken away; blessed be the name of the Lord—My precious Mother—she is not dead—but sleepeth.”  Over the next eight years, Eliza reported different events in the margins of the book corresponding with the date of each devotional—from Jan 1st through December 31st.  For example, if something happened on February 28th, she would record it in the margins on the corresponding devotional for that date.  Usually, but not always, she would add the year.  There are entries from 1860 through 1868, when she was age 12 through age 20.

Reading the innermost thoughts of this young lady from the diary made us feel as though we knew her even though she had been deceased for 75 years.  Her thoughts, fears, despair, heartbreak, love, and faith are recorded in that little book.  She was a teenager who was thrust into the horrors of war across her native Virginia where suffering and dying were ubiquitous.  She lost friends and family members, including her father, uncles, and cousins.  She recorded not only events but reflections in her writings, questioning why such terrible things were happening as they were, but relying upon her faith in God for sustenance. Eliza’s father was John Augustine Washington, the great, great nephew of President Washington.  At the beginning of the Civil War, he had been an aide-de-camp to General Robert E. Lee before Lee was appointed to the position of general over all Confederate forces.  He was killed only five months into the war.  Eliza writes:

And, later she wrote:

His death left Eliza with no parents, her mother having died a year earlier.  Eliza tells us that her father was buried at Waveland at the time of his death, but his body and that of her mother were moved to the graveyard at Zion Episcopal Church in Charles Town, West Virginia in 1868—apparently her last entry in the book. The John Washington family had moved from Mt. Vernon in 1860 to a place called Waveland in Facquier County, Virginia.  Mt. Vernon was in a state of disrepair and in urgent need of restoration by the late 1850s.  The Washingtons sold it to the current owners, The Mount Vernon Ladies Association of the Union, in 1858.   After her father’s death, Eliza was witness to the turmoil of the Civil War in the Shenandoah Valley over the following four years.  Because of the war, and the fact that she was now an orphan, she lived in several different homes—among them, Blakeley, built by Eliza’s grandfather, Claymont, built by her great uncle, Piedmont, and Waveland. The point that struck me most about Eliza’s diary was the loss that she experienced as many of her family and friends became casualties of the Civil War.  The second thing was her maturity in dealing with it all and how her faith provided comfort during those terrible times. In 1861 – 62, she wrote:

Eliza and those around her, however, apparently were able to maintain some semblance of normal life from time to time.  She states on February 12th,

And in another entry in 1864 she writes, “Winchester Races-Oct. 19th, 1864.”  They had apparently gone to the horse races in this nearby town. My wife and I have had several opportunities to visit the area where Eliza lived during the Civil War years.  We visited in 1988, 1995, and 2009.  Each time we discovered something new and interesting about her life.  During the first visit, we found her grave in the Zion Episcopal Church cemetery.  On her tombstone is a poem that was also handwritten on the inside front cover of the devotional book.  It reads: Trials must and will befall But with humble faith to see Love inscribed upon them all This is happiness to me. Eliza married late in life and never had any children.  Perhaps her late marriage was the result of  a protracted personal war that interrupted the years when many young ladies married in those days, and by the death of so many young men in the war. The second thing we wanted to see was the Packett House.  We knew that it had burned in 1973, but wanted to see the remains.  When we were there in 1988, we were told that we could not see the house because it was on private land.  In 1995, we found out that it was now on a golf course and so we hurried to see it.  We were so happy to see some walls still standing with dints from the musket balls quite visible.  Some golfers putting on a green nearby seemed to be mystified as to why we were so overjoyed. We have also driven by Blakeley, visited Claymont that was dilapidated but still structurally sound, and Waveland that was uninhabited but appeared very restorable.  It was interesting to see the grassy hills behind the house at Waveland, and to realize how the place got its name.  The land ripples there, making numerous small, rolling hills, and, therefore, looks like waves on an ocean.  We talked to the caretaker of the farm but, unfortunately, were not given permission to go into the house. We were also fortunate to be contacted by a descendent of the Washington family, Mary Shaffner of Alexandria, Virginia, in 1997.  In 1995, when we visited Mt. Vernon, I had told a woman working there about the diary we had and she later contacted Mary who was active in Washington genealogy as well as preservation efforts.  Mary was kind enough to find and send me a picture of Eliza that was confirmed by an older relative, a John Washington, who remembered relatives saying she was always called “Sister.”  They found a picture of her that had “Sister” written on the back.  In 2009, we were able to visit Mary at her home in Alexandria.  I promised her I would write an article about the diary.  She has waited a very long time for it. I have stated many times that I could live a thousand lifetimes and never happen upon something so historical for such a small price.  I paid twenty-five cents for that diary and it opened up a whole new world to us.  My only regret is that I waited so long to let others, besides family and friends, know about the treasure I found.   Get Your Subscription to the Civil War Courier Today! 1 Year Only $35! Call 1-800-624-0281 Ext. 460 www.civilwarcourier.com