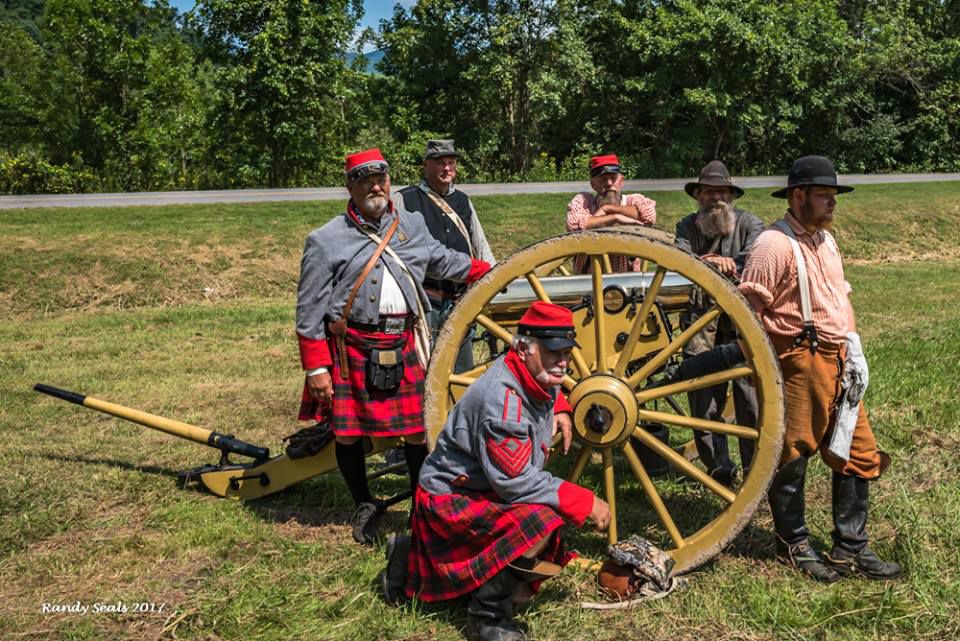 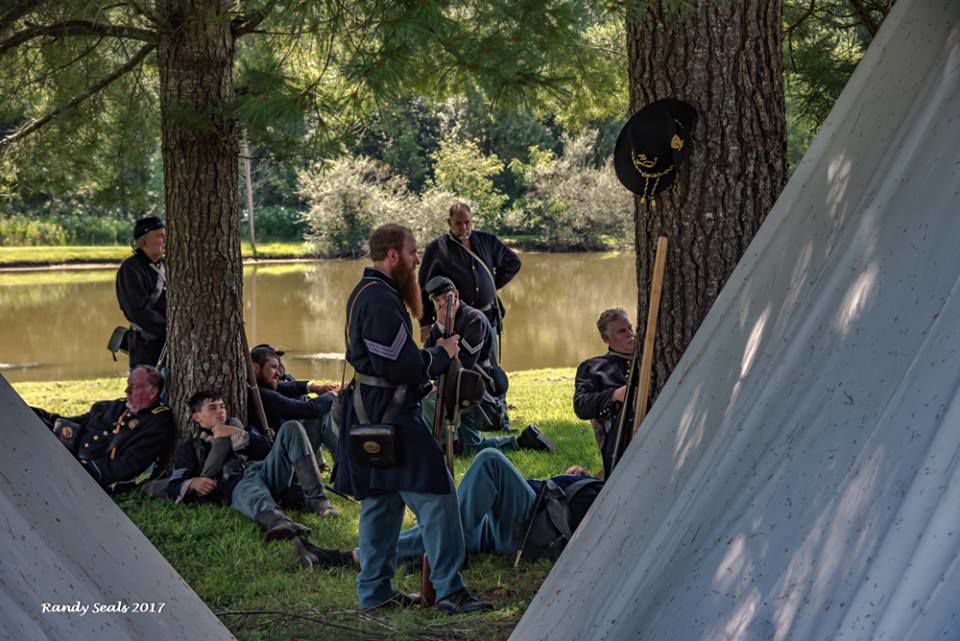 As you descend into a lovely Virginia valley, you are greeted with a breathtaking view. The valley and villa is surrounded by lovely peaks that once housed several breastworks protecting the salt capital of the Confederacy.  During the weekend of August 18-20, 2017 within this setting, a recreation of historic events took place. On August 18, 2017, an educational day was held for local schools and those interested in Saltville’s unique history.  Saturday witnessed several events, included Spencer Two Dog from Hillbilly Blood, Jim Bodine, the Sailmaker on Mountain Men, a flag display, presentation at the Ladies Tea by Mrs. Davis (Joan Howard), Mrs. Lee (Janice Busic), and David Chaltas in the persona of Robert E. Lee.  A medical field doctor talked of protocol and procedures during that timeframe.  Federal and Confederate troops talked to the spectators and shared local history for the early foundation of Saltville to current plans.  The reenactment represented several battles that occurred during the War Between the States on Saturday and Sunday.   Sunday witnessed a tremendous turnout for church service, as prayers were offered for this nation and peace to prevail among all Americans.  ‘Chaplain Chaltas offered a sermon on Heroes and He Keeps Sending Us Angels.’  The following synopsis is of one battle that took place in October.

The city of Saltville is nestled in the majestic mountain range boarding the two Virginia counties of Smyth and Washington.  It was founded in the middle of seventeen hundred but it was not until William King established the salt works in 1795, did it start to flourish.  It possesses a spectacular panoramic view of the flowing valley surrounded by a mountain range of unparalleled beauty and within its boundaries one can become mesmerized by the sense of serenity.  Within the marshlands exists a rare commodity for the area:  salt.  It was one of the most important commodities in the South’s possession and had to be defended.  That wondrous preserver of food must be guarded at all costs! The only other substantial salt works was at a community known as Brashearsville (now Cornettsville) in the deepest region of eastern Kentucky.  This area was extremely difficult to navigate due to poor roads and mountainous terrain.  In addition to these conditions, bushwhackers and Union sympathizers also made it dangerous to obtain and keep the commodity.  Therefore, the Confederate army of the Department of Southwest Virginia was given the charge of protecting the salt works at Saltville.  They attempted to accomplish this through an elaborate artillery perimeter that overlooked and encircled the pristine valley.  This elaborate artillery defense was necessary because the department was undermanned and outgunned.  The preparation would soon be put to the test due to Union efforts to destroy the salt works that were being planned. General Stephen Burbridge, commander of Union troops in Kentucky, devised a plan to invade Virginia and destroy the salt works at Saltville.  The plan would be a two-pronged attack.  He would enter Virginia through Pound Gap with approximately five thousand (5,000) troops and General Alvan Gillem would come from Bulls Gap in Tennessee with twenty-five hundred more men.  Saltville would be attacked from two fronts with many more men than the Confederate defenders.  General Henry Halleck (General Burbridge’s superior commander) approved the plan and left it to Burbridge to work out the details.  Burbridge and Gillem knew that timing and coordination would be essential for the plan to succeed.     The troops that Burbridge would lead into Virginia were all Kentuckians except for the 11th Michigan Cavalry and 12th Ohio Cavalry.  Attached also was the 5th U.S. Colored Cavalry, a unit of almost five hundred (500) U. S. Colored Troops (USCT) that was formed from former slaves and free Negroes from Kentucky.  Colonel Robert Ratliff and other white officers commanded the unit of black soldiers.