Starting at
$1.99 for 30 days
Get Started
View all rates
You have permission to edit this article.
Edit
Home
News
Sports
Living
Special Sections
Classifieds
Obituaries
The Job Network
Coronavirus News
1 of 4 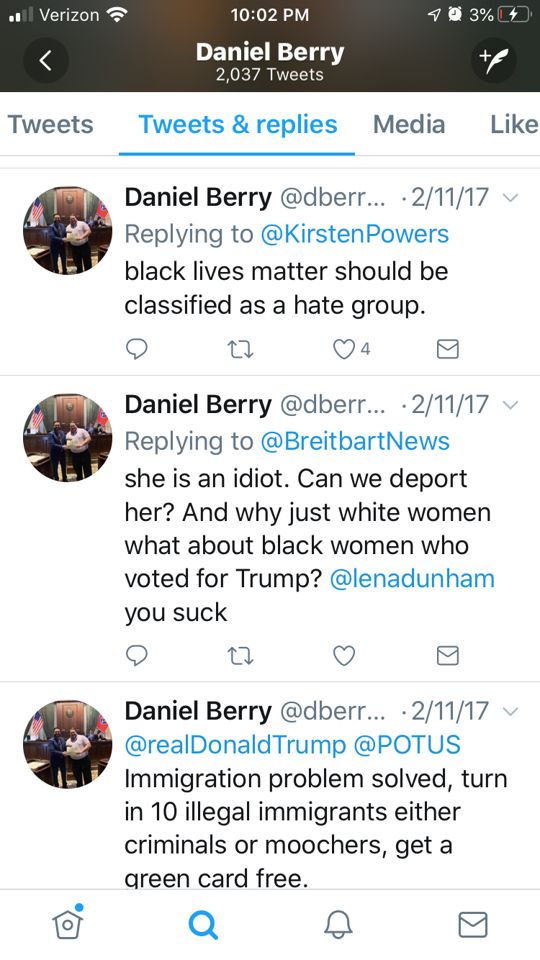 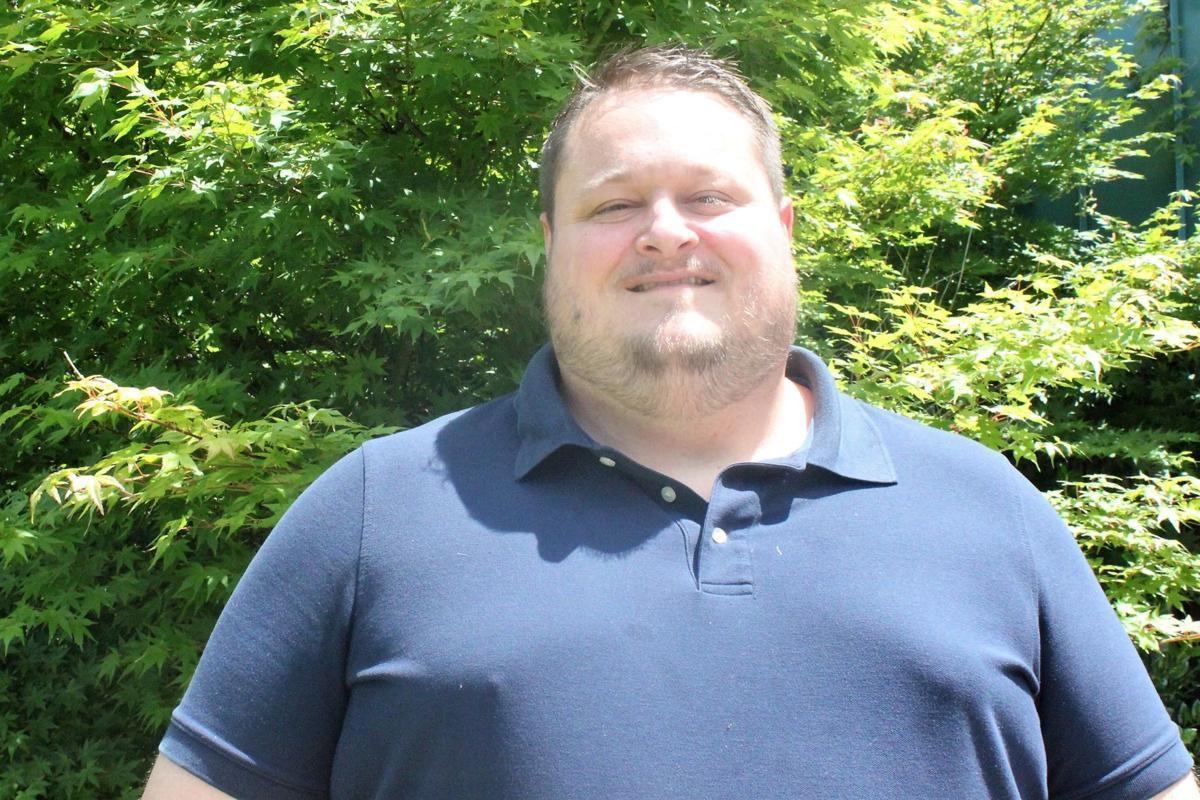 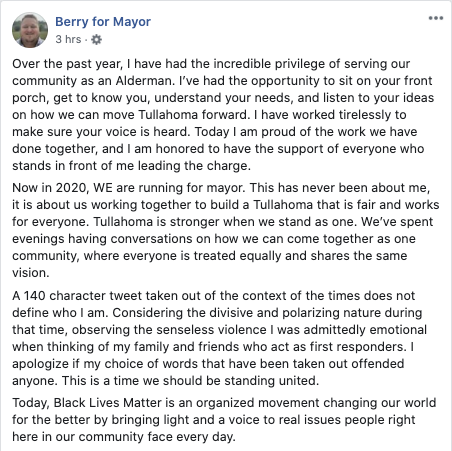 A Tullahoma alderman came under fire Wednesday when some "insensitive" tweets he sent in 2017 came to light.

A screenshot of tweets from Alderman Daniel Berry dated Feb. 11, 2017, circulated around social media feeds. In the tweets, Berry calls for the Black Lives Matter organization to be "classified as a hate group," asks if actress and activist Lena Dunham can be deported and suggested illegal immigrants turn in other illegal immigrants for a free green card.

These three tweets from Alderman Daniel Berry, sent in 2017 before he ran for office, caused a social media stir Wednesday, June 10.

The Black Lives Matter tweet in particular caught the ire of area residents Wednesday, as communities around the nation are currently marching against police brutality and in support of the organization's goals, including Tullahoma this weekend.

Berry issued a statement Wednesday evening addressing that tweet, saying it was "taken out of context of the times" and it did not define who he is as a person.

Berry said the tweet was sent as an emotional reaction to an "divisive and polarizing nature" of the Black Lives Matter movement in 2017 and had a personal connection associated with it.

In his Facebook statement, Berry said he had family and friends who were working as first responders during that time who were hurt in connection with BLM protests. At that time, protests and riots culminated with the deaths of officers in places including Dallas and New Orleans, Berry told The News.

"It was a separation between the organization and the movement," Berry said. "When you have leaders of any organization - and I don't care what organization it was - calling for violence, I won't ever agree with that."

Berry apologized if the tweets caused anyone distress.

"I apologize if my choice of words that have been taken out offended anyone," his statement read.

Berry added to The News that he did regret sending that tweet as well as the other two, but that he did "own it" and no longer believed BLM should be classified as a hate group.

"Obviously, yes, I do regret it, but I own it," he said. "I said it, and I will own this. It was an insensitive comment that you can't take back."

Echoing his Facebook statement, Berry told The News he now feels Black Lives Matter is "an organized movement that is helping change views and race issues that affect people here in our community."

Berry further said he will be attending the community's "Tullahoma Will Breathe" march Saturday afternoon.

"I think this is an excellent opportunity for Tullahoma to stand together united on the issue and not just that, but for us to set an example for other areas that want to hold these rallies and stand strong as a community," he said. "Those are statements I made before the tweets came out.

"She had an article saying that if you were a white woman and you voted for Trump then you're racist and you needed to be educated," Berry said. While he acknowledged his wording could have been different, his main point was that being a white woman voting for President Donald Trump didn't necessarily make you racist.

"Why are you singling out one group of people?" he said.

On the illegal immigration tweet, Berry admitted it was also "insensitive."

"I acknowledge that," he said of the tweet. "I do have my stance on immigration. I don't think that's relevant to the city of Tullahoma, but I do believe that was an insensitive comment."

Berry added that all three tweets were sent at a time in his life before he had ever considered entering politics.

"I wasn't running and never had intentions of getting involved in city politics," he said. "Those were all something I said three years ago.

"My life isn't just 140 characters," he told The News. "I'd say if you want to judge me, look at the videos that I share every night when we talk about the issues in Tullahoma. I think they'll see that I'm not the evil person I'm being made out to be."

Berry encouraged anyone with questions about the tweets or his views on racism in the community to contact him via email at daniel@berryformayor.com or to call him at 931-229-0364.

Nathalie Reynolds, of Manchester, has joined Baker & Cole Properties as the newest addition to their realty team.

Locals will have a chance to meet the candidates at the 2020 City Election forum set for July 9. The event, featuring candidates for mayoral a…

One of the effects of the COVID-19 pandemic has been boosted online sales, and that has impacted the budget of the Coffee County Schools posit…

Colleagues welcomed Roxanne Patton, executive administrative assistant for Coffee County, back to the office after she underwent a surgery.

Updated InformationAccording to event organizers, the march will no longer end at South Jackson Civic Center due to a private event being held…

Rally in Tullahoma started at 5 p.m.

Peaceful protest in Tullahoma on June 13.

On June 9, the Coffee County Commission approved funds from county hotel tax revenues – an amount of $74,000 – to cover the extra deficit of t…

Meet Michael Young II, a father who has restored the relationships with his children thanks to Be the Bush Ministries Crisis Center. Be the Bu…

Families can apply for the Pandemic EBT program

Arnold AFB has announced employee has tested positive for COVID-19.

Coffee County Sheriff's Department has partnered with Summit Food Service, which is the new company providing kitchen services at the jail. Su…