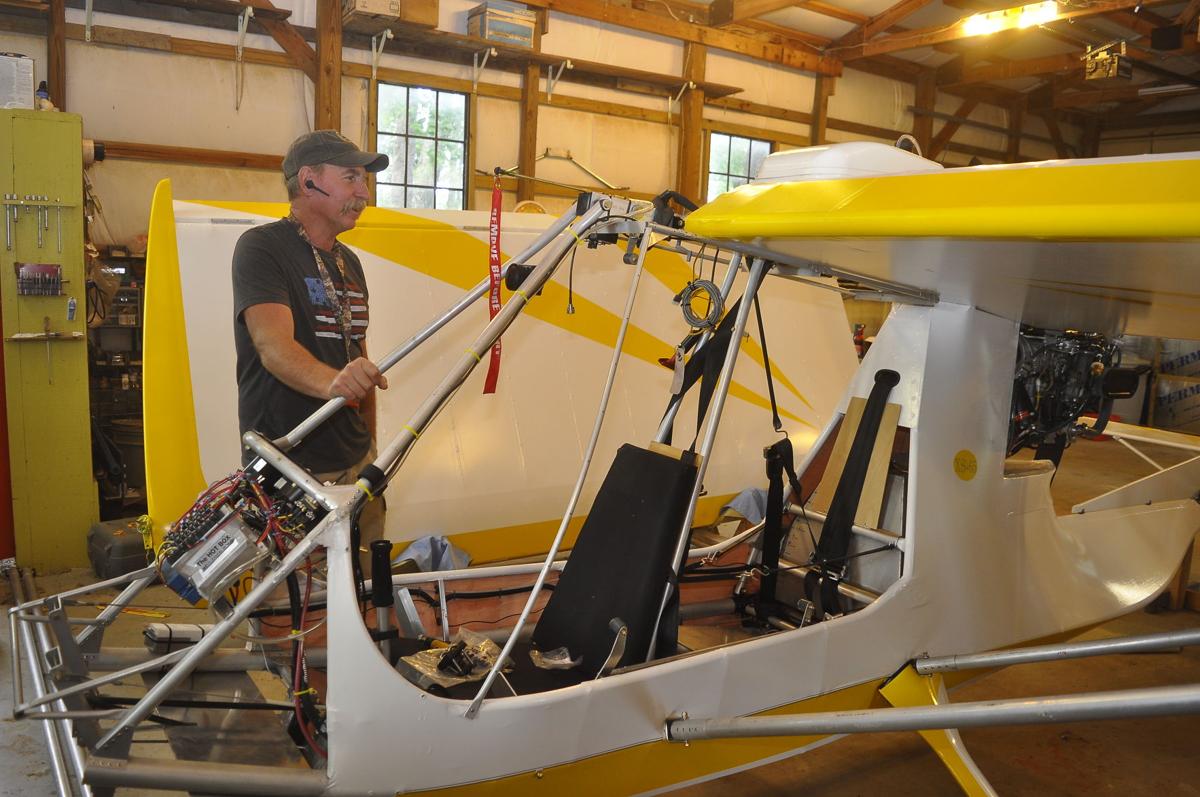 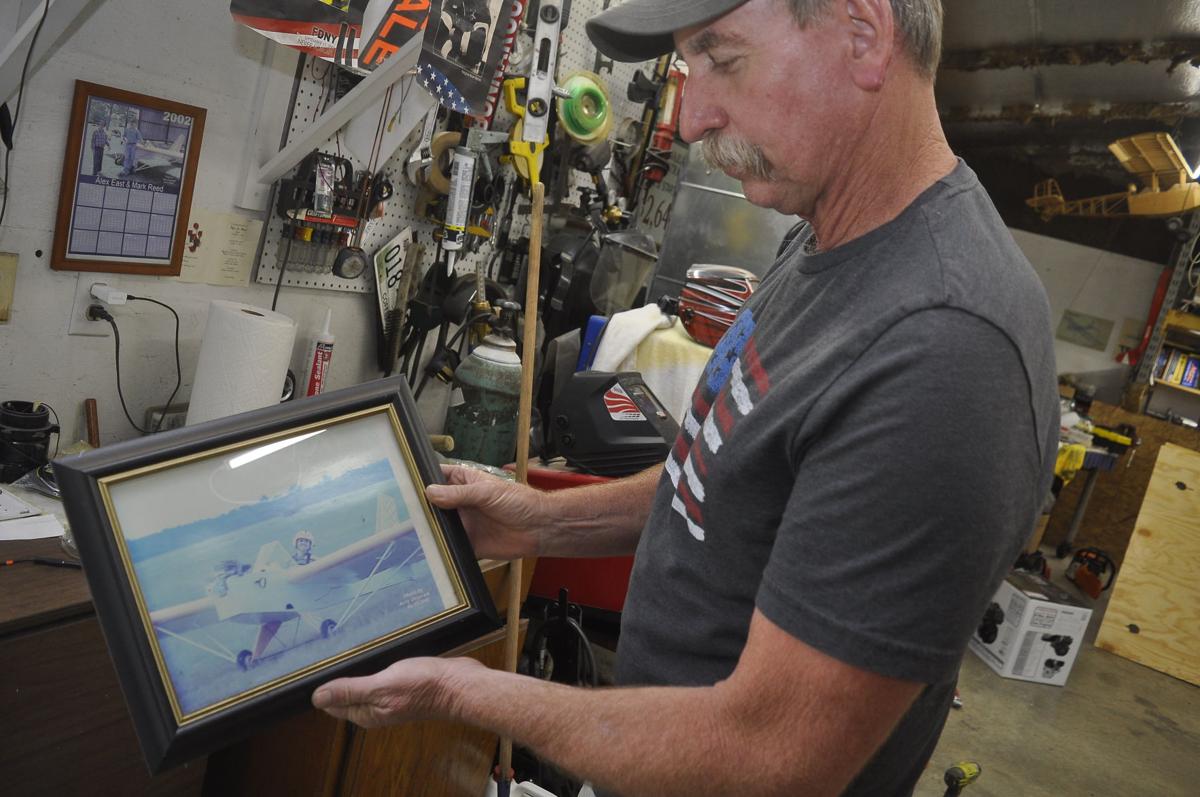 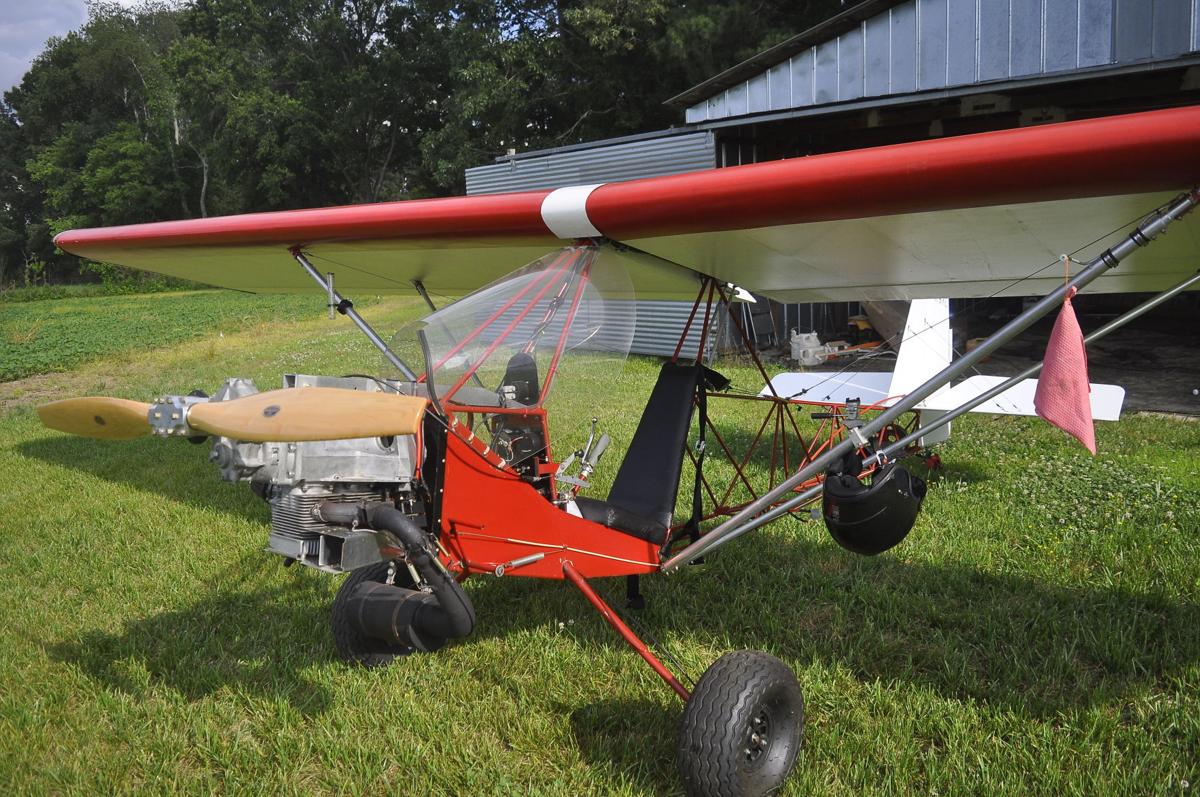 There’s a calm look of serenity that passes across local amateur aviation enthusiast and firefighter Mark Reed’s face when he discusses flying. Reed has built two experimental planes, is currently working on a two seater and says he has one more grand project left in him.

“I do enjoy flying. It is a lot of fun. On a good calm, late afternoon, when there’s no wind, you get up and you can see the world. It’s a very relaxing thing to do – sheds a lot of stress,” he said.   And the veteran Manchester Fire Department chief likes to build things. When it’s an airplane you’re building, it has to be right. That’s where good plans come in. Reed’s plans for his first aircraft, wood-framed ultralight, came from local aviation engineer, the late Wayne Ison (who was inducted in the Experimental Aircraft Association Hall of Fame in 2000).

Reed said he was in high school when Ison designed the airplane, but it wasn’t until later in life, and Ison had developed several different models, that he came to design Reed’s current airplane the Airbike.

The Airbike with an open canopy and a straddle seat is as much a flying motorcycle as an airplane. It has a steel frame and upgraded the motor for more power. Reed balanced the new motor with gym leg weights.

“It was really a contrast to what he’d been doing. He used the same airfoil and wings, just moved it to the top,” Reed said.

These planes come in kit form. Reed’s first plane was a wood frame TEAM Aircraft Mini-Max. He bought the plans from Ison in 2000 after settling into a new workshop.

“I studied the plans for a week or two and started, as we call it,  making sawdust. Two years later I had a flying aircraft,” Reed said.

Reed flew the little plane for about two years from the open area around his Ragsdale community home.

Later on, after Reed had eventually sold the Minimax, a man from Meridian, Miss.  called about commissioning him to build an Airbike kit. A man had purchased a kit years ago and was looking for someone to help with the fabrication.

Reed agreed and over the years, the two became friends. At some point the Meridian man decided he was too old to fly the Airbike, so he gave it to Reed.

“I tinkered with it and tried to fly it and it was underpowered. It sat … for about eight years, and then I got on it hot and heavy. Now it flies really great,” Reed said.

It’s a little unnerving to fly Reed admitted. The transition from a sit-in cockpit to the open experience  flying the AIrbike was an adjustment.

“Your legs are on the outside of the fuselage. You’re strapped in with a four-point harness, but it gets a little gusty sometimes,” Reed said.

“It’s a well-designed plane that’s fun to build. I enjoy building as much as I love flying,” he said.

Reed’s current project, a Quad City Challenger is on the verge of being finished. This is a two seater. By adding the second seat, the complexity has grown exponentially. The Challenger will have a 65 horsepower aviation engine, an emergency parachute, and an FAA N number.

Getting the N number (the aircraft identification number painted on the tail of aircraft) is possibly the most involved aspect of the project. It requires Reed to get the plane registered, each step of construction must be detailed down to the hours in the shop, the paperwork impeccable, and inspections and flight testing, all for an official airworthiness certificate.

“There’s a lot to it. You have to have a builder’s log where you write down everything you do each day,” Reed said. “A lot of paperwork.”

An FAA representative will eventually inspect the airplane and checkoff the paperwork. A provisional certification can then be issued for the test flights, 40 hours from Tullahoma Airport, all limited to 25 nautical miles from the test airport. A second inspection will finalize the process and an Airworthy Certificate can be issued. Reed, as the builder can then be issued a repairman certificate for annual condition inspections.

Reed has been working toward his pilot’s license that he will need to fly the two-seater. The first two planes were ultralights and with limited weight and fuel capacity, were below the FFA’s requirement for a licensed pilot.

Reed noted that his journey in aviation was constantly being aided by older pilots and builders who have since passed away. He is proud to carry on the tradition of building and flying these very small aircraft.  Now, it seems, however, that a younger generation is less interested in amateur aviation. He hopes to pass along his love of flying.

The Tennessee Wildlife Resources Agency will be participating in Operation Dry Water, July 3…

Those traveling on Interstate 24 might have to seek an alternate route.

The Arrowhead Boys Ranch will celebrate Independence Day on Saturday, July 4 with fireworks,…

For the first time in Bonnaroo's relatively long history, the festival held June in Manchest…

There will be two tax-free weekends in Tennessee this year, according to the Tennessee Depar…

The Saharan Dust is moving across the Atlantic Ocean

The Saharan Dust is moving across the Atlantic Ocean.

The Storehouse Food Pantry has seen immense support from the community, which has allowed th…

Sean Doney, 33, of Caryville, plead guilty for illegally killing a cow elk on the North Cumb…

The state Department of Labor has released unemployment data for May showing Coffee County with 14.2 % of the workforce unemployed. The state …

An ongoing sewer project in the area near the Duck River, behind the old Riverview School has hit a snag when the bypass system that the contr…

High school football and girls soccer teams across the state will see their seasons delayed, that according to the TSSAA on Tuesday.

He never held public office, yet he served the people of Coffee County for over 50 years. He never had children of his own, but those who knew…