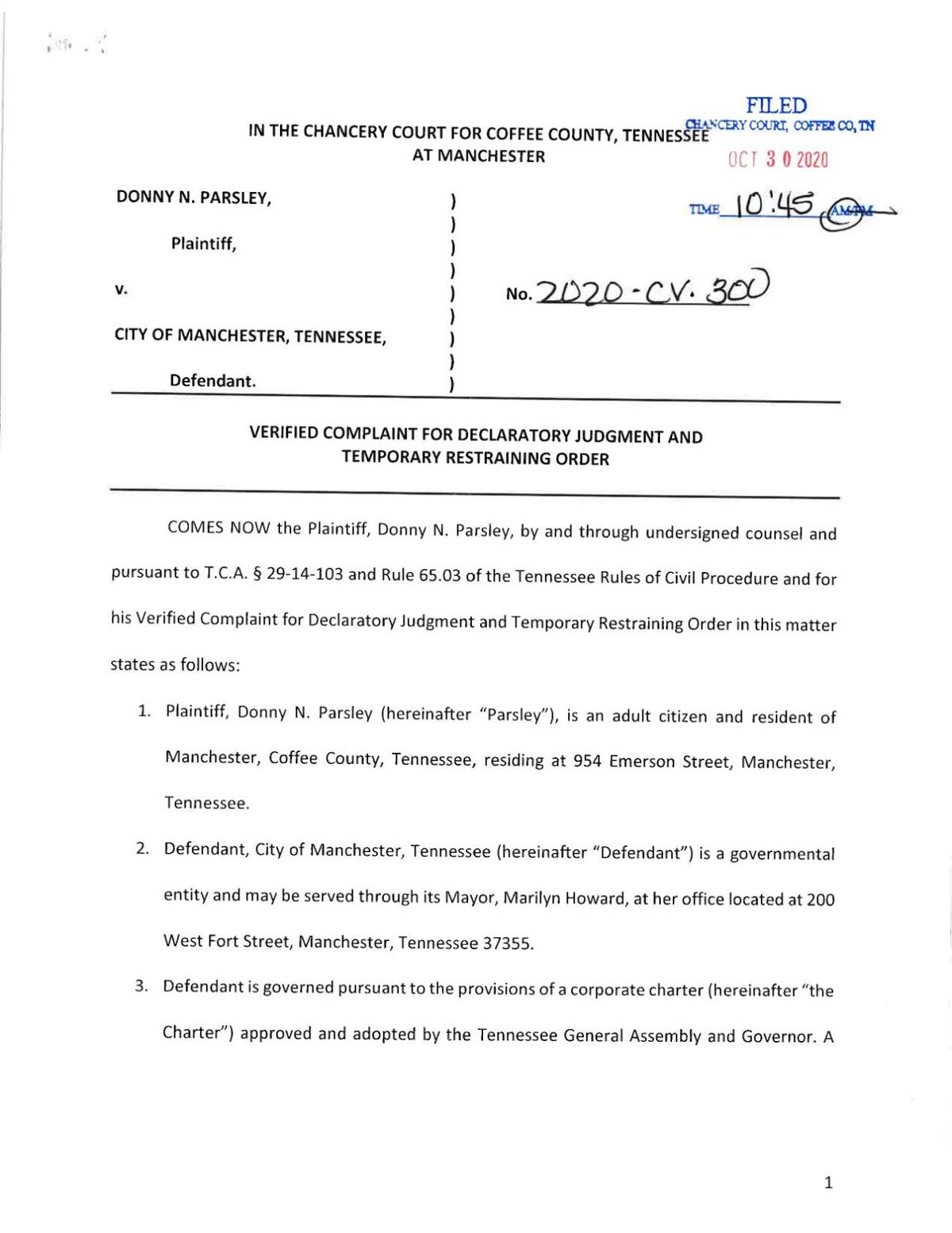 Donny Parsley has filed a complaint against the City of Manchester, stating he “should be sworn in immediately to fill the vacant position on the Board.”

Instead of appointing Parsley, the city has asked citizens to fill out alderman appointment applications for the alderman position on the Manchester Board of Mayor and Aldermen which is vacant after the death of Mayor Lonnie Norman. The deadline for submitting alderman appointments application was Oct. 30. BOMA voted Oct. 19 to appoint Vice Mayor Marilyn Howard to take over as Mayor of Manchester. That came after the passing of Norman on Oct. 12 and left one of the aldermanic seats vacant.

On Oct. 30, Parsley filed a Complaint for Declaratory Judgment and Temporary Restraining Order against the city in Coffee County Chancery Court. According to the complaint, pursuant to the provisions of the city charter, “Parsley should be sworn in immediately to fill the vacant position on the Board, as the other methods prescribed by the Charter for filling a vacant Alderman term should only apply in the event there is no remaining qualified ‘highest vote getter’ from the previous election.”

The charter provides multiple mechanisms by which a vacant alderman position may be filled until the next regular election. The position may be filled by majority vote of the remaining members of the board; by appointment by the mayor; special election; or filled by the ‘next highest vote getter’ from the previous election, according to the complaint.

Parsley was a candidate for election to the Board of Aldermen during the last election cycle concluding in August 2020, finishing the election as the “next highest vote getter,” behind now-current Aldermen Ryan French, Chris Elam and Robert Bellamy, the complaint states.

Manchester as required by the Charter,” the complaint states. “Pursuant to the provisions of the Charter, Parsley should be sworn in immediately to fill the vacant position on the Board, as the other methods prescribed by the Charter for filling a vacant Alderman term should only apply in the event there is no remaining qualified ‘highest vote getter’ from the previous election.

“However, the Mayor and remaining Board have stated their intentions to accept applications for the vacant Alderman position and fill the vacancy by majority vote among the Mayor and present Alderman.

Upon information and belief, the Mayor and Board will vote to fill the vacancy at their next regularly scheduled meeting on November 2, 2020. Parsley will suffer immediate and irreparable injury should the Mayor and Board be allowed to fill the vacant Alderman position prior to further hearing before this Court to determine the parties’ respective rights and obligations.”

Parsley is asking the court to require the defendant to answer in accordance with Tennessee law and the Rules of Civil Procedure.

Parsley asks that “this Court enter a temporary restraining order prohibiting Defendant from filling the vacant Alderman seat by majority vote of the Board of Mayor and Alderman or by unilateral selection by the Mayor pending further hearing.”

He also asks “that, upon final hearing, the Court declare the proper procedure for filling the vacant Alderman position pursuant to the provisions of the Charter,” and that plaintiff be awarded the costs of this action.