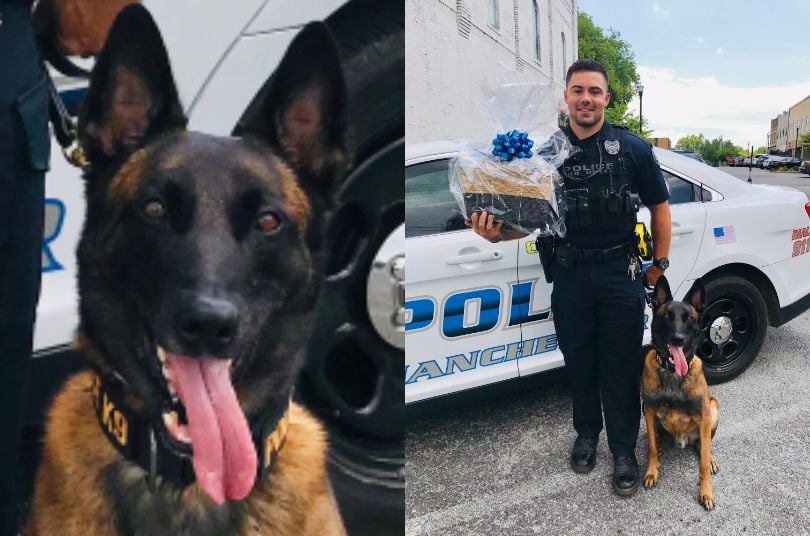 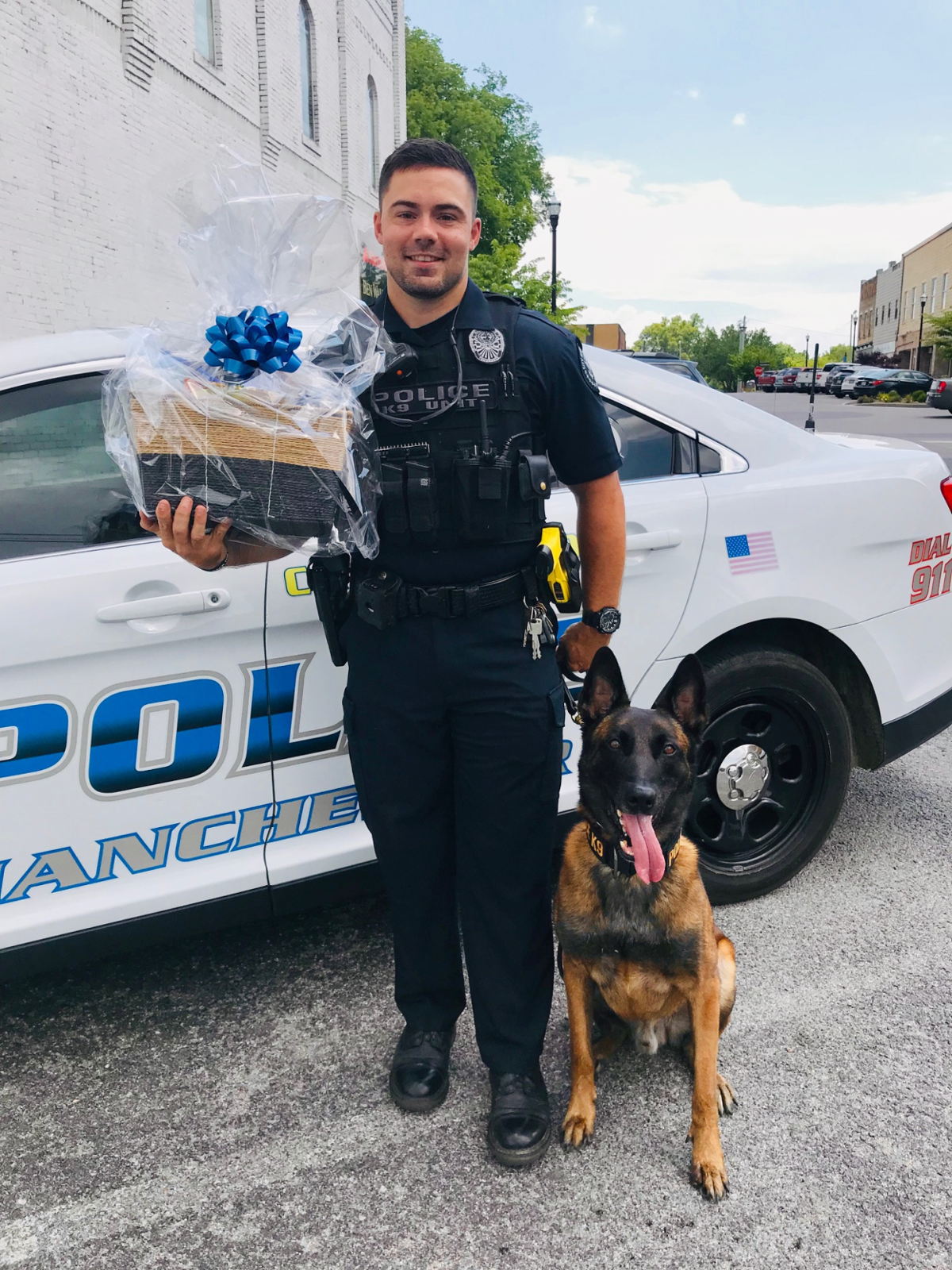 Pictured are Derek Bowles and K-9 Storm with the Manchester Police Department.

Just recently, Storm alerted Bowles of the presence of a narcotic odor coming from a suspect’s vehicle during a traffic stop. That led to a probable cause search of that vehicle, and officers found a large sum of money, along with methamphetamine, baggies and scales.

“I was promoted to the position of K-9 Handler in August of 2019,” Bowles said. “We have been a certified team since December 2019 in both patrol and narcotics. We currently hold two narcotics certifications with AWD (American Working Dog Detection Certification) and NNDDA (National Narcotic Detector Dog Association). We hold a patrol certification with AWD.”

The responsibilities of Bowles and Storm include assisting in the detection of illegal narcotics and apprehending fleeing or combative individuals suspected of committing criminal acts. One of the most rewarding aspects of the work is the relationship created with Storm, said Bowles.

“My favorite part of the job is the bond that has been developed between myself and K-9 Storm,” Bowles said. “In such a short time, K-9 Storm has become a loyal and dependable partner at work but has also become a part of my family. That bond has made us a better team and it is only going to continue to get better and be more and more beneficial to making the community a safer place.”

The City of Manchester acquired Storm through the Manchester Police Department Drug Fund and of no expense to the city taxpayers, said Bowles. Storm is a Belgian Malinois

“K-9 Storm was imported from the Netherlands by Nashville K-9, where we received our initial training,” Bowles said.

K-9 Nashville trains officers and helps K-9 handlers receive the highest qualifications in the United States, according to the organization’s website.

“In almost three months of being a certified team on patrol, we have assisted in a number of executed search warrants and have assisted in recovering evidence in those cases,” Bowles said. “We have made several drug cases, which include marijuana, methamphetamine and heroin. We have also assisted in the apprehension of a suspect wanted for questioning by a neighboring agency in reference to a shooting incident in that jurisdiction.

“We have to maintain a minimum of 16 hours of continued training each month. Our training includes narcotic detection, tracking persons, bite work, and building searches. We have trained in numerous locations throughout the county to get the dogs used to all different types of environments which will benefit us in real world situations. June 21-26, myself along with K-9 Storm, Officer Daryn Gadeken and K-9 Nalty, will be attending a week-long patrol K-9 seminar in Scottsville, Kentucky.”

“The K-9 and handlers spend countless hours in training to help gain accuracy during searches,” Bryan said. “We appreciate all the efforts that are put forth to help make our community safe. Most of our clients don’t come into treatment on their own, it’s usually due to some kind of consequence. If we can help one person into recovery and help them gain their life back, it’s worth it to us.”

Bradford Health Services presented Storm and Bowles a gift basket and gift certificate as a token of appreciation.

There will be two tax-free weekends in Tennessee this year, according to the Tennessee Depar…

The Saharan Dust is moving across the Atlantic Ocean

The Saharan Dust is moving across the Atlantic Ocean.

The Storehouse Food Pantry has seen immense support from the community, which has allowed th…

Sean Doney, 33, of Caryville, plead guilty for illegally killing a cow elk on the North Cumb…

Today, June 24, the Tennessee Bureau of Investigation released its 2019 ‘Crime in Tennessee’…

With the upcoming elections approaching, the Coffee County Election Commission is taking ste…

Defund the police? What does it mean?

With any controversial topic, critics sometimes muddy the waters by misstating what their op…

A man is recovering after being shot Thursday evening at his home.

TPD warns of dangers of fentanyl

The TPD is warning about the dangers of fentanyl being used as an additive in illicit drugs.…

This week marks the start of competition for Mary Humphrey, the McMinnville, Tenn. teen comp…

Applying for the fall 2020 semester at Motlow State is just that – simple and free. Those wo…

Shelbyville police are searching for a man wanted for a first degree murder.

Those traveling on Interstate 24 might have to seek an alternate route.

Bonnaroo Music and Arts Festival’s organizers announced June 25 that this year’s event set for Sept. 24-27 will not take place. Not only does …

The Franklin County Sheriff’s Office is investigating an incident that occurred on Saturday, June 27, at approximately 7 p.m. in the Pleasant …

The Tennessee Department of Health will not issue data on COVID-19 cases and tests on Sunday, June 28, 2020 due to an unplanned shutdown of th…

The state Department of Labor has released unemployment data for May showing Coffee County with 14.2 % of the workforce unemployed. The state …

An ongoing sewer project in the area near the Duck River, behind the old Riverview School has hit a snag when the bypass system that the contr…