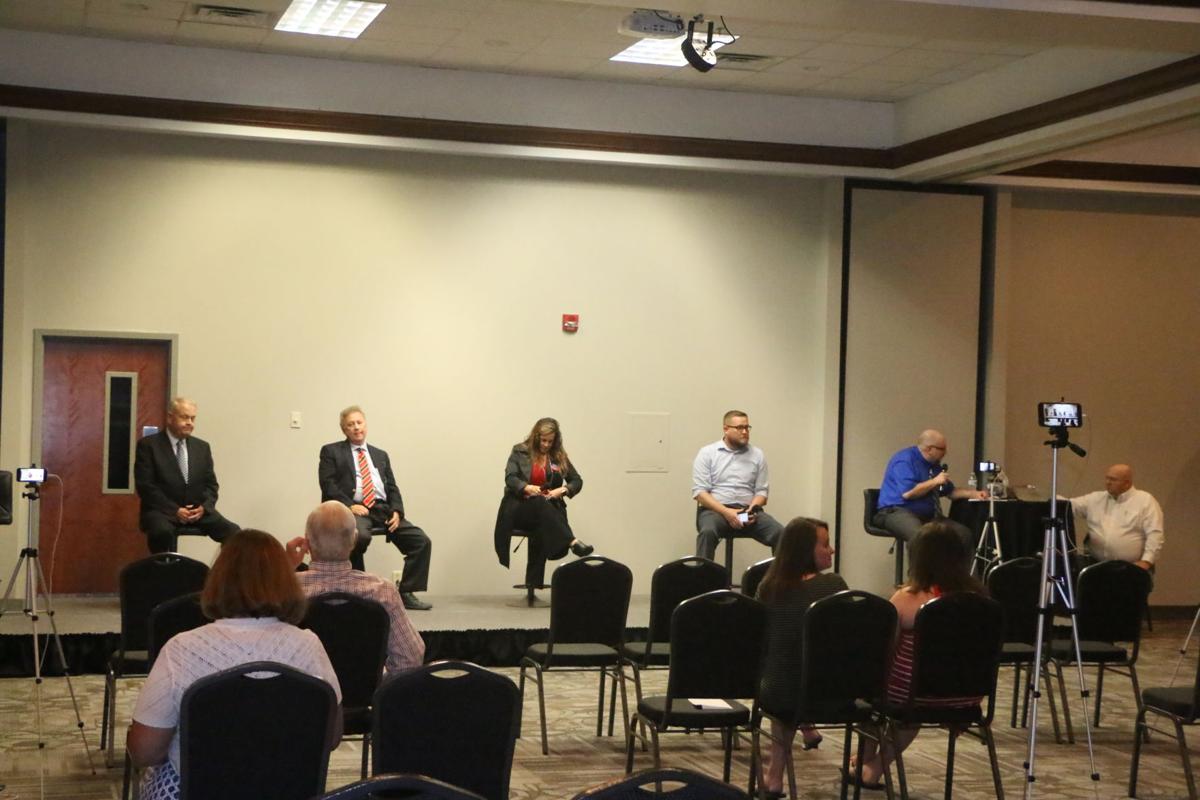 The Manchester alderman candidates wait for their chance to speak at the forum held on July 9. 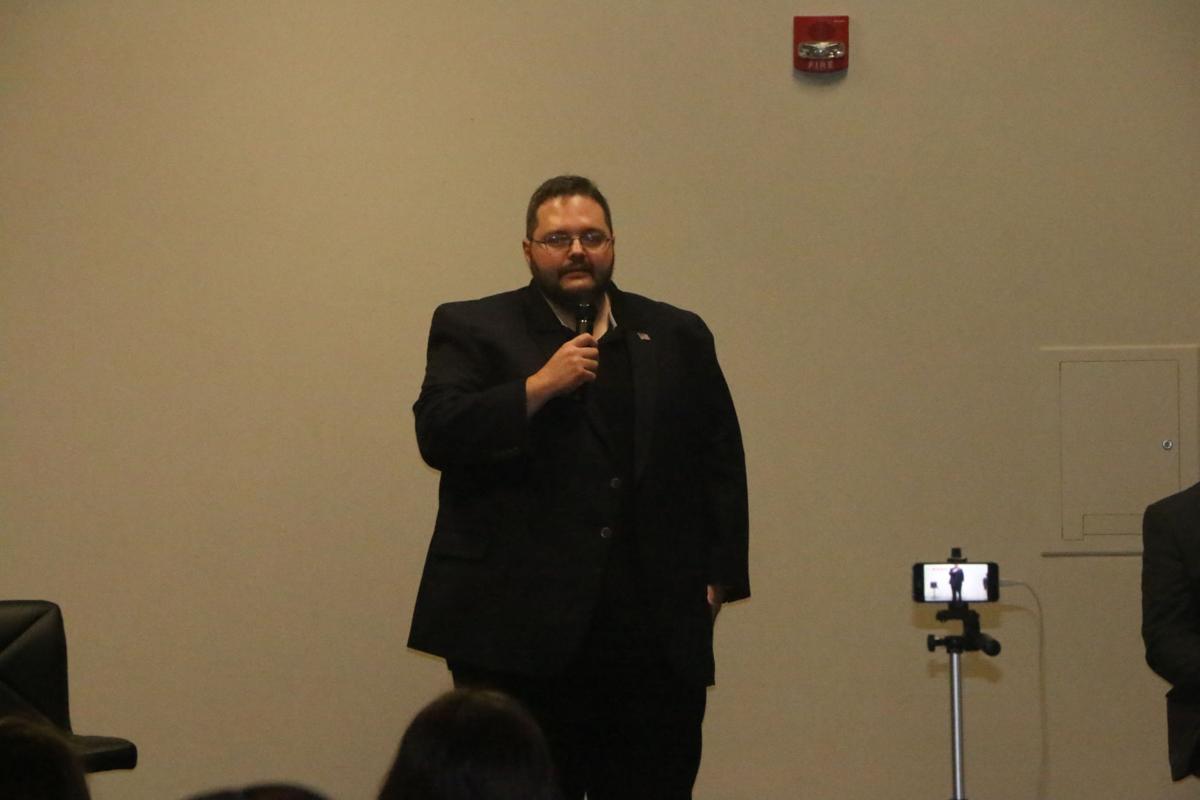 Manchester mayoral candidate Steven Jones begins his time at the political forum with an opening statement. 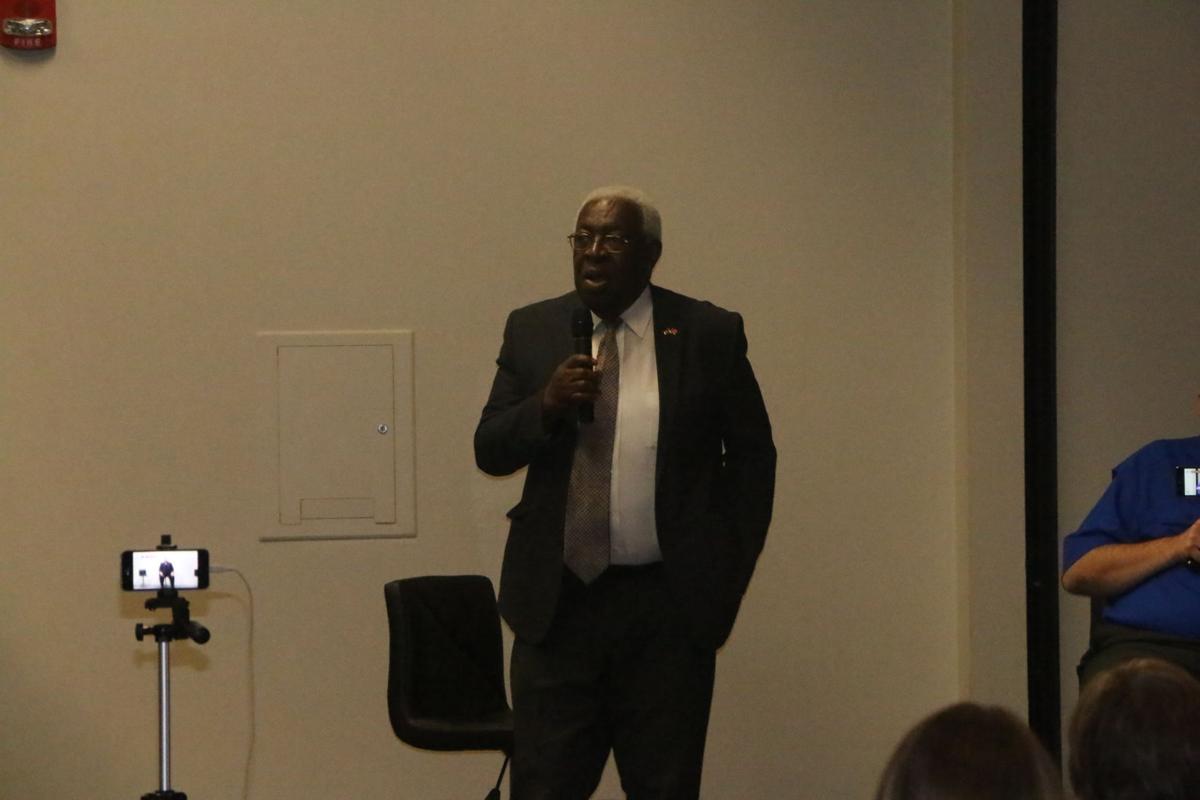 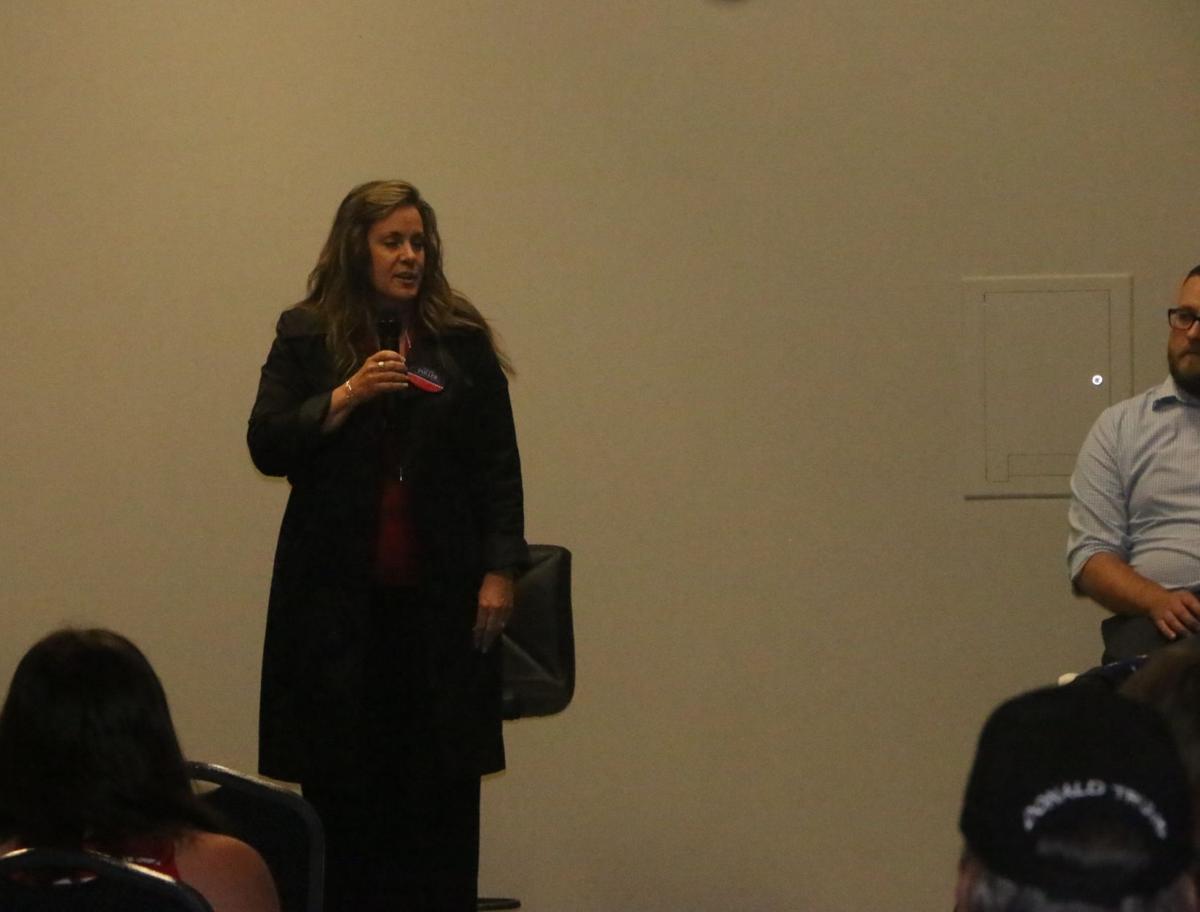 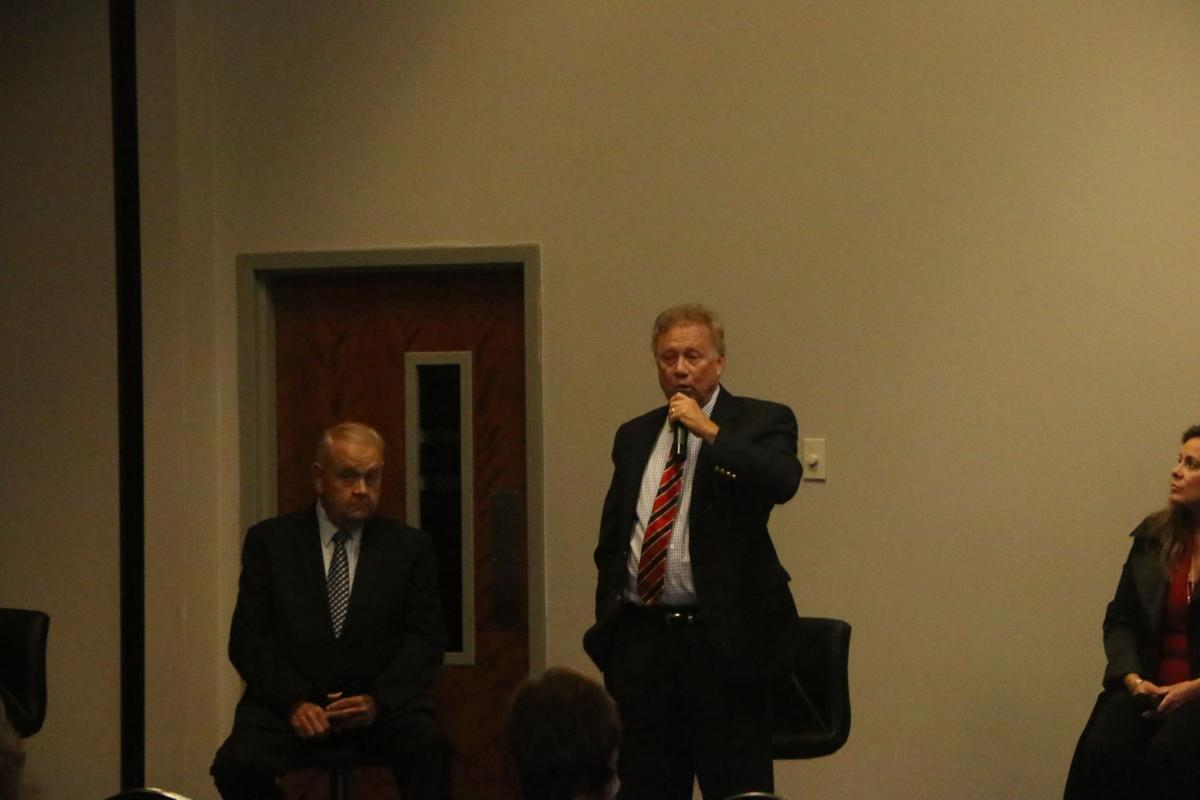 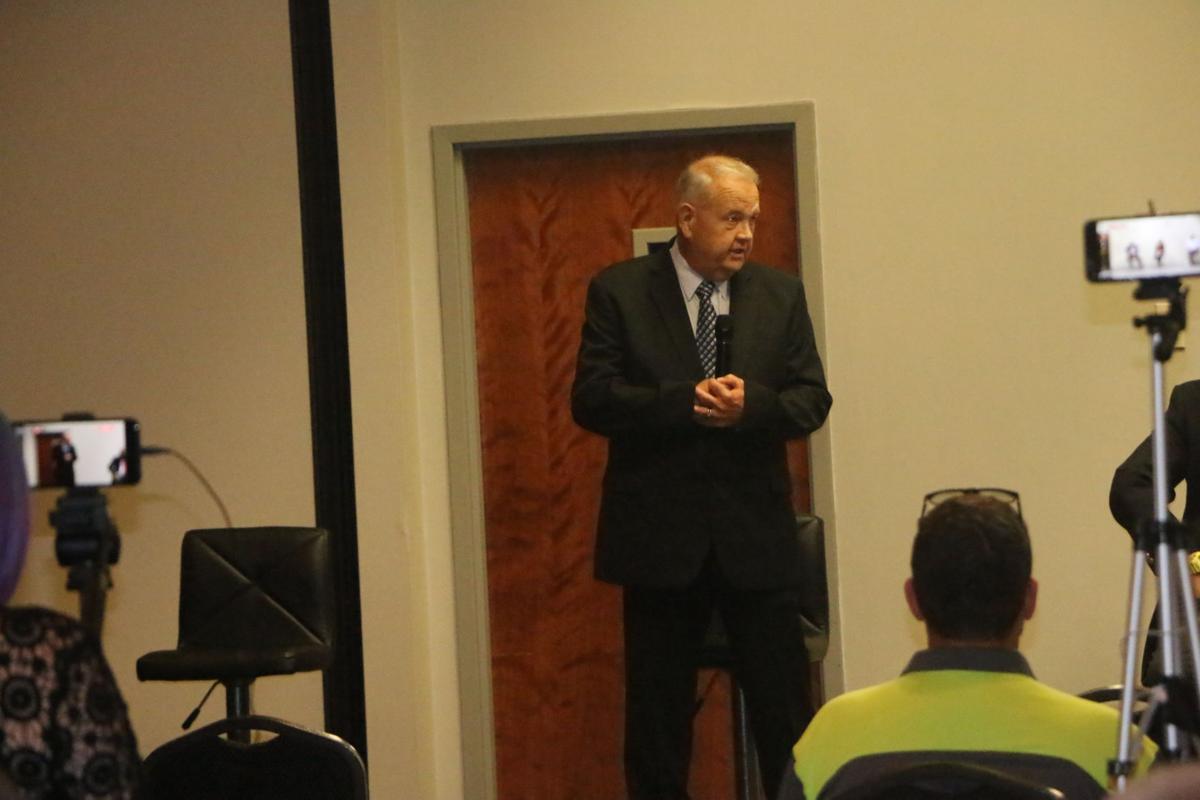 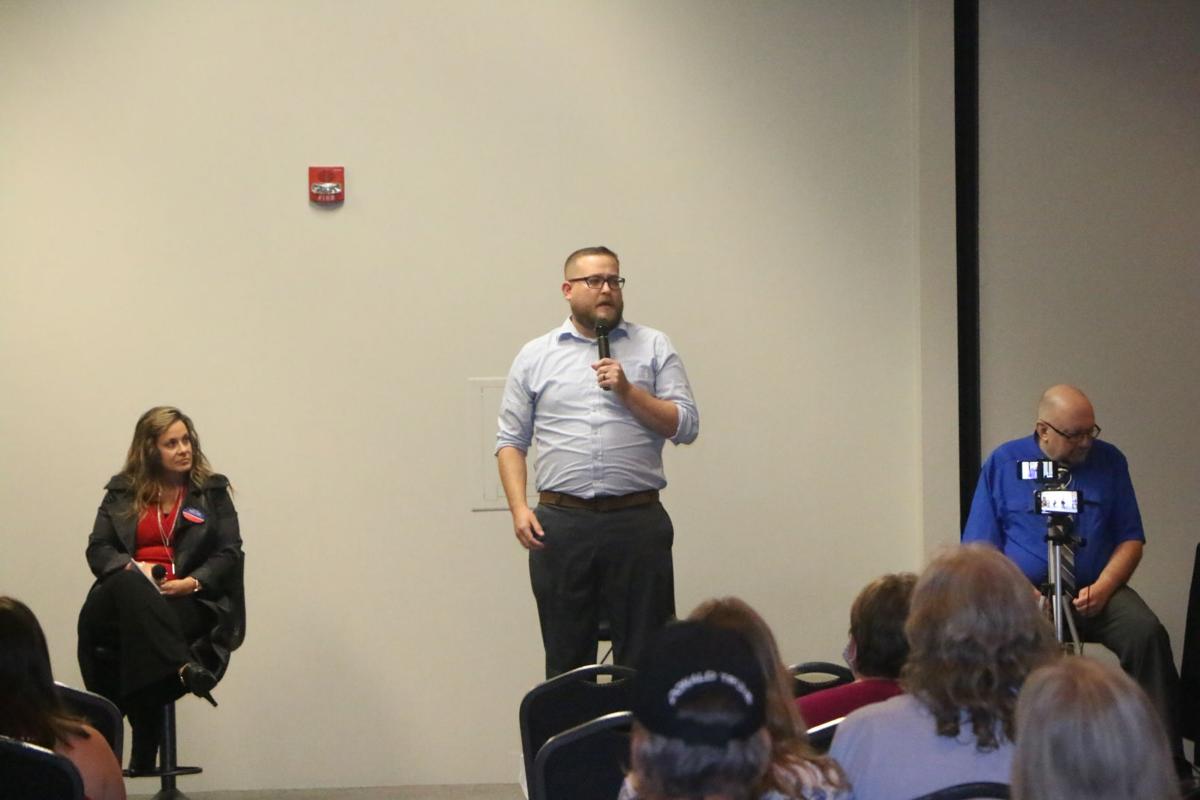 Alderman candidate Ryan French talks to the visitors during his opening statement.

On July 9 a political forum was held at the Manchester-Coffee County Conference Center for the aldermanic and mayoral candidates for both Manchester and Tullahoma. The event was moderated by Lucky Knott of Rooster Radio and in partnership with The Manchester Times and The Tullahoma News.

The event began with the candidates for alderman. Two Manchester alderman candidates, Donny Parsley and Chris Elam, couldn’t make it due to scheduling conflicts. This left Ryan French, Tammy Fuller, James Threet, and Bob Bellamy to give their say and express their ideas to the attendees.

Why are you the best candidate?

French responded that, “I will work with anyone.”

Fuller responded with, “I have a passion for people, and am also willing to work with anyone.”

Threet said, “I’m not the best candidate but can move from failure to failure with grace and dignity.”

Bellamy replied, “I’ve got common sense and I will work with whoever is elected if they are willing to help Manchester.”

Will you work to bring sidewalks?

The second question was related to the sidewalks near Westwood Elementary. The question was if there were any plans to install sidewalks there so the students could walk to and from school without having to walk in the ditch or on people’s lawn.

Threet answered first saying, “I don’t think there will be a sidewalk built in Manchester in five years.”

Fuller answered, “It’s something that needs to be looked at, and will be glad to gather more information on the issue.”

Bellamy said, “That area is one of worst spots for kids to walk and it is dangerous. We can get grants to fix that problem, and will work hard to build those sidewalks.”

French was asked last and responded, “We will build sidewalks in the next five years, and we will build them near Westwood School. One of the plans we are implementing now is the addition of a concrete crew so that we can finish those projects without contracting out.”

Fuller was asked the question first. “I would have to get a lot more information before I decided one way or the other. Even then I would ask the people if they would be in favor of becoming a Metro government.”

Next was Bellamy who responded, “I would be open minded. In the short term I think it would be very expensive, but in the future it might be the best thing to do.”

French responded next saying, “The decision to go metro isn’t a decision for aldermen to make. That decision falls to the voters. For now we need to find a way for our governments to work together.”

Threet answered last saying, “Metro is not going to happen. The point of government is to make itself bigger.”

How do you see the conference center’s future?

The final question before each candidate had their closing remarks was related to the conference center. The question posed was if the city needs to have input in the center and if the center should continue to exist at all.

Bellamy went first for this question.

“The conference center isn’t going to be fixed overnight,” Bellamy said. “We would love for it to make a profit and that will take effort on all our parts. I do think that the city should be in charge of running it however.”

Threet responded next, “The conference center will be there and it will always be there. The government doesn’t allow their projects to fail.”

Fuller answered that, “The PBA needs to let go of it. If the city is the one paying the bills then the city should be the one in charge of it. We do need to work harder to attract business to the center so that it can make a profit.”

French had the last word on the topic saying, “I believe in the conference center, and further I think that the PBA should stay in charge of the center.”

French said the PBA has worked with the city in the past to find solutions.

“We used to have representation on the PBA but stopped having it a few years ago,” French said. “I think we should have a representative there.”

The closing remarks began with French who said, “I believe in the community and want it to continue to be something that my kids can be proud of.”

Fuller was next, stating, “I want to see the community grow properly and not become the next Murfreesboro where it outgrew its infrastructure. I want the people to be heard.”

Threet followed with his closing remarks saying, “We are in competition with other counties and we are losing. You have to keep the businesses because if you don’t, you will seize to function. It’s a competitive world now.”

Bellamy closed out Manchester’s alderman forum by saying, “I need the people of Manchester’s help. Tell me what’s wrong. Give me your ideas. I don’t want to see the problems we have now be passed down to future generations.”

Next were the Manchester mayoral candidates Lonnie Norman and Steven Jones. The first question posed to the candidates was the inclusion of a city administrator.

Norman was asked the question first and replied, “I’m for anything that helps Manchester.”

Jones replied, “I agree with Lonnie. In fact the state recommends that we have one.”

The second question was what issues the candidates saw in Manchester and their solutions to fixing them. Jones was asked first this time saying, “Flooding is a major issue that hasn’t been addressed in addition to sidewalks and school buses. I think we can work together to come up with a solution rather through grants or something else.”

Norman answered, “We have talked to the people at the Air Force base for a solution to the flooding issue and they are going to inform us of possible solutions to the problem. Preliminarily we were told that cooperation with the citizens of Manchester is key.”

The final question for both candidates was if they were in favor of adding a city recruiter to attract businesses to the city.

Jones answered, “We have tried to get more businesses in over the years to varying degrees of success, if it helps Manchester I would consider it.”

Norman answered, “We have looked at it both ways. We formed a committee that talks to all the retail businesses and we work on it daily. People do call all the time to get business here.”

The closing statements began with Norman saying, “Thank you everyone for being here. The job is difficult but we have a city surplus in funds and I would like to continue to spur that growth.”

Jones finished by saying, “We need growth and strategic growth for the city.”

Who do you support for Manchester City mayor?

Results from all Manchester precincts:

‘Isn’t it worth it to stay cautious?’

On July 9, Manchester City, Coffee County and Tullahoma City Schools made the decision to send students back to the classroom in 20 days. The …