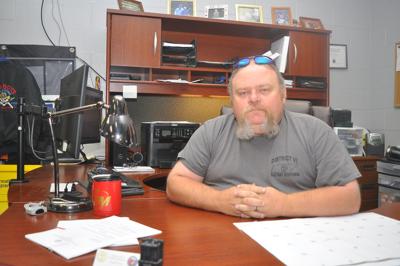 This column is an ongoing feature of Manchester Living recognizing the dedication and everyman heroics of our local first responders.

Coffee County Emergency Management and Homeland Security Director Allen Lendley operates a small but efficient department out of what was formerly the Coffee County Jail. As its name suggests, the agency handles emergency planning and response to any public safety hazard.

“We are a staff of two full-time people. So what we do coordinating emergency responses is getting resources to the agencies that need them,” Lendley said.

“We respond to disasters, we do all hazardous materials work in the county, weather monitoring for events and public safety planning for public events,” he said.

Lendley has been working in public safety in one form or another for 33 years. He has worked at Tullahoma Fire for 18 years and at Coffee County Emergency Medical Service. He came to EMA in 2007.

“I think what makes it interesting is there are no two days alike. Any public safety agency you just never know what’s going to happen from day to day,” he said.

Lendley has had public safety in his blood since his youth, watching “Emergency” on TV.

“I was like, I want to do that when I grow up. I’ve never veered from that. I became a firefighter and an EMT. This line of work combines the two.”

When the weather turns rough, Lendley and his Deputy Director Matt Aussiker keep a close watch on what’s happening at the local level for the National Weather Service.

“We’re their eyes on the ground locally for what’s going on weather wise,” Lendley said.

Following the tornado in Tullahoma a few years back, Lendley’s agency brought in state resources, weather service assistance, while coordinating the cleanup.

“We went door to door and checked on folks and did damage assessments on homes to see how much monetary damage they had. We work with state and federal partners to see if (local responding agencies) can get reimbursed through FEMA.”

Eighty percent of the counties expenses for recent flood responses were reimbursed from federal funds.

“If you need it, we can get what you need. We work with cities and county to ensure the safety of public. Almost 60,000 people,” Lendley said.

Lendley also oversees a volunteer CERT (citizens emergency response team), a group that offers volunteer opportunities for those not wanting to become a volunteer firefighter or law enforcement officer.

There are about 15 people on the team that help with events, helping the public as needed, operate the radios during events and even help with human remains searches.

Lendley said that a CERT class would be offered in the coming months. For more information on volunteering, go to the Coffee County Emergency Management Agency/ Homeland Security Facebook page.