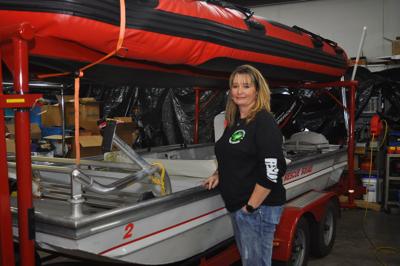 This column is an ongoing feature of Manchester Living recognizing the dedication and everyman heroics of our local first responders.

Rescue Squad member and board treasurer Jennifer Vandagriff Simmons is dedicated to helping others. Whether it’s a call out for a fallen hiker, a lost swimmer or even people in the community in need, Simmons and the members of Coffee County Rescue Squad freely give of their time to help.

“I love helping people. You’re put on earth to help people. It’s what you’re supposed to do,” Simmons said.

Simmons has been with the rescue squad officially for 15 years — plus two more before she joined.

“I’m a member of the trench team, EMR, Search and Rescue, Structural Collapse Team,” she said.

Simmons is certified to perform almost all (excluding some of the water rescues) that the team is able to conduct.

While modest describing her work for the rescue squad, her husband, CCRS chief Neal Simmons, explained that Jennifer is tireless on her devotion to helping others.

Over the holidays, Jennifer spent two weeks off from work catching up the books, so all the time records were in order for end-of-year reporting.

The squad is also well-known for its charity work, Jennifer is crucial to those efforts.

“We have a benefit coming up for Sierra Winton (Jan. 25 at Coffee County Central High School) who needs a double lung and heart transplant. And there’s another one coming up in February,” Jennifer said.

She said that, additionally, funds must be raised to keep the squad ready for emergencies.

A lion share of the squad’s budget comes from fundraising at events like the Fourth of July fireworks in Tullahoma, a food booth at the Coffee County Fair or a beer tent at Bonnaroo.

The squad is all volunteers.

“We work our jobs to do this job,” she said.

Calls come all times, day and night. That means burning countless hours of leave responding to calls or time away from family.

“You have to put money in this to help others,” she said.

The squad assists other agencies outside the county with searches as needed. The squad’s diving team is the only one in the state that has a diver-held underwater sonar camera that can scan zero-visibility waters out to 75 feet to help find drowned victims.

Teams are called up depending on the incident and member availability.

A recent incident involved a car that had run into the Duck River from Highway 55.

“We knew to activate the swift water team, the divers showed up too,” Neal said.

If they call for a missing person, we know what equipment to take. We have (Forward-Looking Infrared cameras). If there’s a drowning, we know to take sonars,” he said.

“Volunteers are a big asset to the community. They spend countless hours training and don’t get a dime for it,” he said.