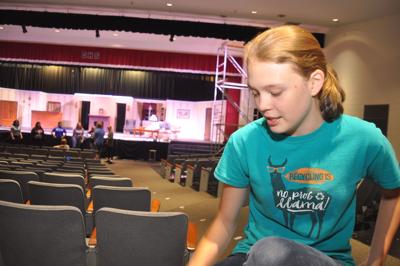 Senior student Brooke Sanders is unique within the Coffee County Central High School theater program because of her versatility. That can mean anything from working backstage organizing the dressing area or choreographing an ensemble number.

“I think that’s what makes me unique. I’ve done pretty much everything but work power tools,” Sanders said.

Sanders confided that she has an aversion to power tools,

“My main thing is probably organization,” she said.

In a production, with dozens of moving parts that must come together for a spectacular moment to happen on stage, organization is crucial.

Sanders in the chaos of the dressing room, Sanders keeps wardrobes and changes flowing properly and organized.

“If you can’t find your costumes, that ruins the whole shebang,” she said.

At Trevecca Nazarene University, Sanders wants to major in speech and theater education. She wants to teach theater at the middle school level.

“My middle school teacher did so much for me and set me on a path toward this. It changed my life. I want to be that person for somebody,” she said.

“I really enjoyed watching the (CHS) theater program grow. I plan to return and check in on it.”

Sanders has continued her whole high school career (though she skipped Theatre II) and has now reached one of the top levels of the program, Theatre IV.