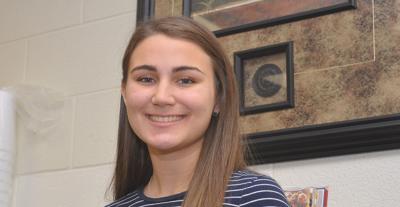 “In December we had a service project where we wrote students’ names on slips of paper and attached a peppermint,” Lapczynski said.

These small gifts were distributed to each member of the student body.

“After Channing’s (death), we wanted to make everyone feel included. Over the holidays, some people have a hard time. Some people don’t have a family like everyone else does. We wanted people to know that they’re loved and that we want them to stay,” Lapczynski said.

“It just makes life easier. Some people aren’t made to be leaders, but if somebody takes charge, it makes the whole process easier,” she said.

Leadership can be a small thing that moves a project along in a big way.

“I just make my voice heard when I don’t agree with something. If something is not going right, I kinda coast it in the right direction.”

At other times, leadership can be just a friendly voice in a time of need.

Academically, Lapczynski enjoys science and history. She’s in honors biology, AP European history and is looking at AP biology for her junior year.

“I find the ratios, the equations and stuff interesting. It’s amazing what medicine can do,” she said.

Lapczynski is in culinary class at CHS and will compete at the upcoming Family, Career and Community Leaders of America competition.