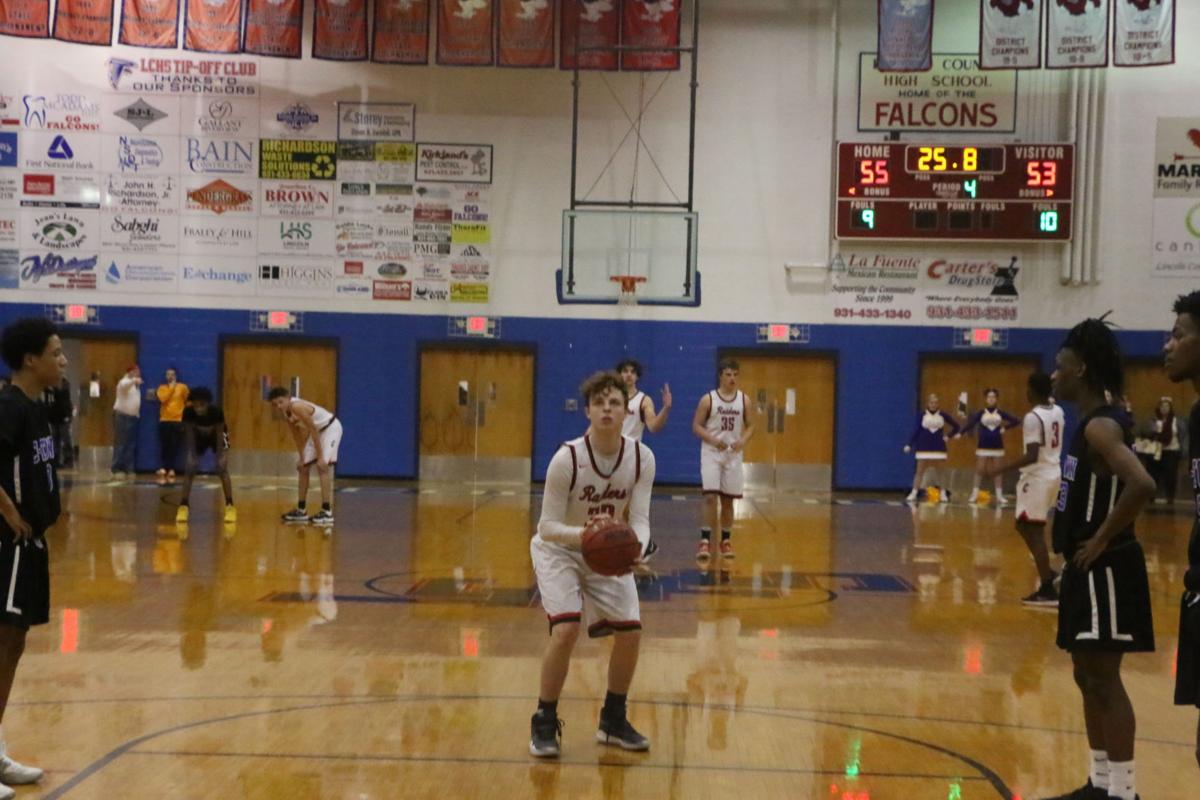 Jaxon Vaughn prepares for a crucial free throw with seconds left to play. 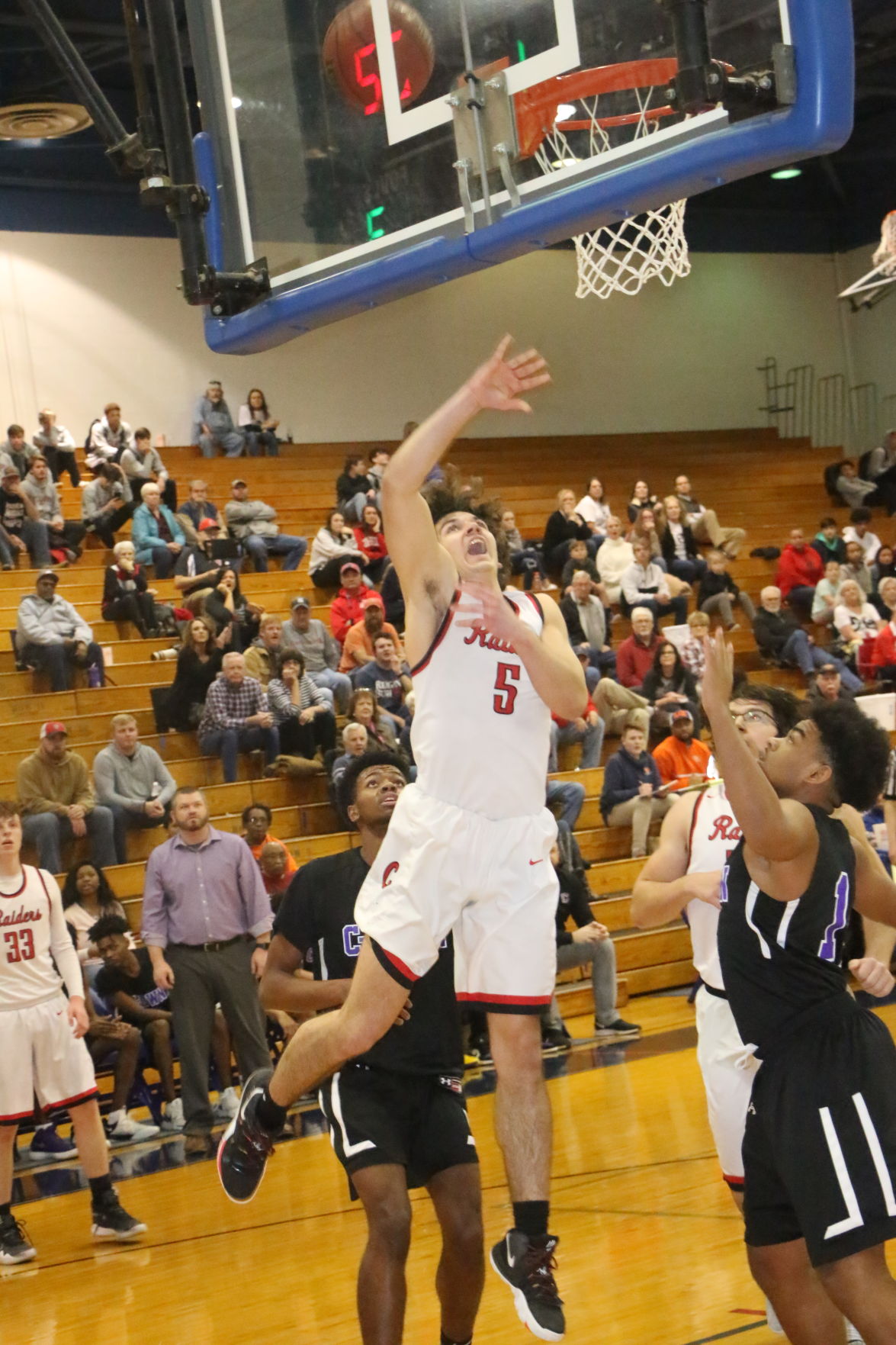 Kyle Farless goes through the contact for the lay-in basket.

Jaxon Vaughn prepares for a crucial free throw with seconds left to play.

Kyle Farless goes through the contact for the lay-in basket.

The Red Raiders participated in the divisional tournament on Thursday night against Columbia. The game opened with a three-point explosion by Columbia. The team hit 6 threes in the first quarter alone. Coffee elected to respond to Columbia’s sharpshooting by driving into the paint and drawing fouls, which also had the effect of slowing Columbia down. Jaxon Vaughn was a beneficiary of this tactic having eight foul shot attempts in the game and hitting four of them.

The second quarter was a defensive battle by both teams, with a combined 10 points allowed in the quarter. This would be the lull in the storm for the back and forth contest as each team erupted into a hurricane of points after the half. It became clear during the quarter that being able to make the most out of scoring opportunities was the key to this contest.

The second half could be best described as a duel. No ground was given by either team, as each team’s scoring run was matched by the opposition. Coffee achieved this by doing what was working in the first half, attacking the paint. Four Coffee players scored coming out of the half with Connor Shemwell and Kyle Farless both scoring five each. Columbia on the other hand only had two players to score in the third quarter, but number 23 for Columbia scored 14 points by himself. He was a thorn in Coffee’s side the entire second half. Any run that Coffee went on was quickly matched by a quick three wrestling momentum back. If there was any doubt that this game was going to come down to the wire the third quarter quickly erased it.

The fourth quarter had both teams elevating their play, the moment wasn’t too big for either team with clutch moments from both. Kyle Farless from Coffee County had seven points during the quarter hitting his shooting stride when his team needed him to, one of the biggest shots being a three pointer he hit in response to Columbia’s own long-range dagger. Jaylon Wooten also embodied the moment knocking down every free throw presented to him in the quarter. This allowed the team to pull ahead of Columbia for the first time in the game.

Some of the most important plays in the fourth came on the defensive side of the court, however. Two crucial charge calls were drawn against Columbia, eliminating the chance of a response from the dangerous three-point team. Coach Micah Williams was also giving his team the best chance to win by taking away opportunities from Columbia with smart timeout usage with under a minute in the fourth. He waited until his team crossed half court to eliminate the trap set by Columbia that was set on Coffee’s in bounder. This mitigated the chance of a turnover and an easy transition basket from Columbia.

The last minute of play in the fourth was full of moments that can be pointed to as crucial to affecting the outcome, but one sticks out above the rest. Towards the end of regulation Coffee was continuing to reach the foul line, but they could not convert all of them. The team missed four in the quarter, and this made the difference. Columbia had been quiet on the three-point line in the fourth. Each free throw missed added more tension until it finally happened at the worst time for the Red Raiders. After a missed Coffee County free throw number 23 for Columbia hit the game tying three to send the game into overtime. The tension instantly released, and momentum shifted firmly into Columbia’s favor.

The overtime period had the teams using their preferred scoring methods, with Coffee scoring six points between Jaxon Vaughn, Connor Shemwell, and Kyle Farless. Number 23 finished his late game heroics with another three pointer to seal the game 68-72 for Columbia. Coffee’s woes continued with a 63-55 loss to Lincoln county in the consolation game.