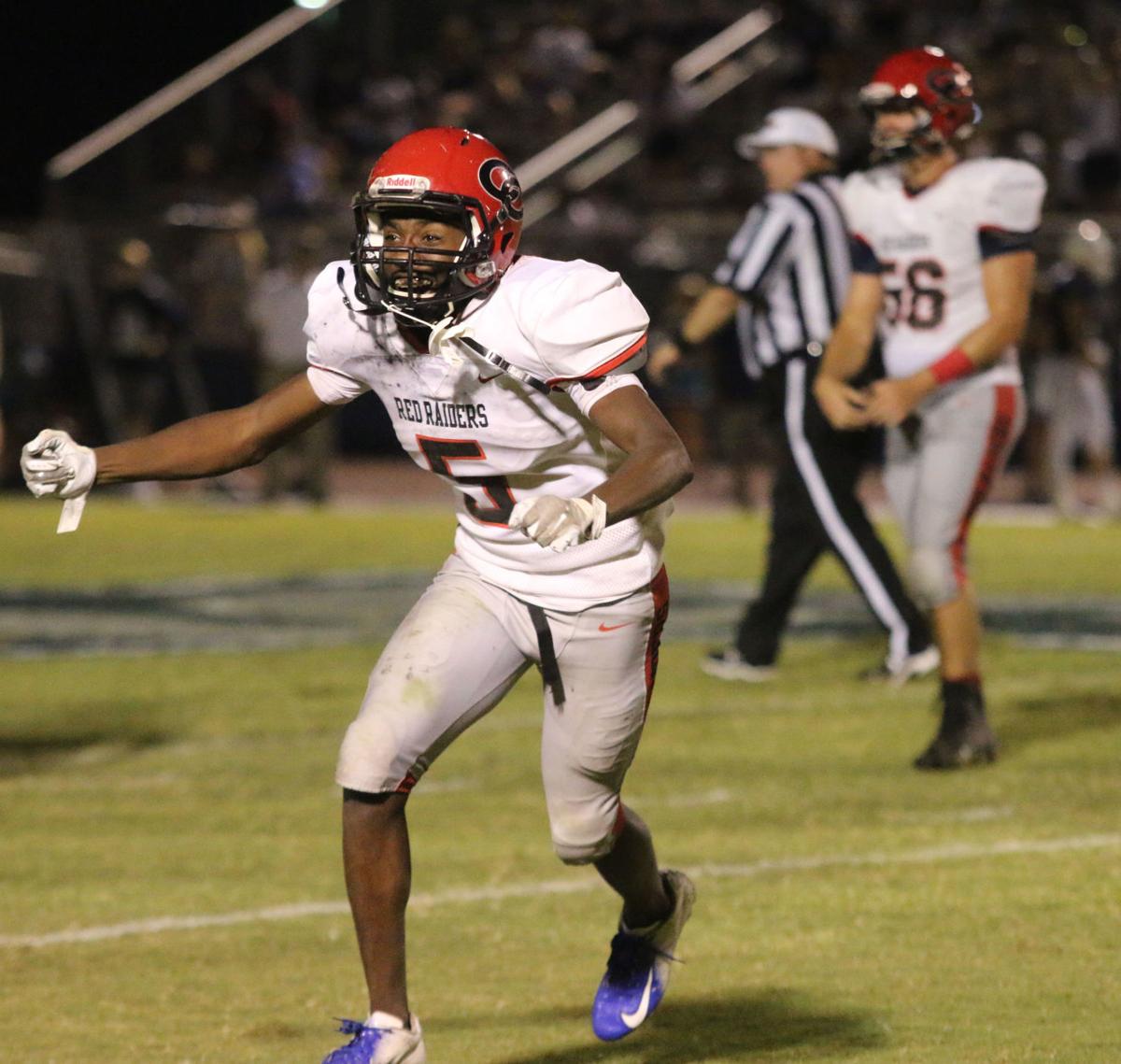 An excited C.J. Anthony runs toward the visitors' stands after time expired Friday night following the CHS victory. Anthony played a major role with two touchdowns, including a punt return to the end zone in the fourth quarter. 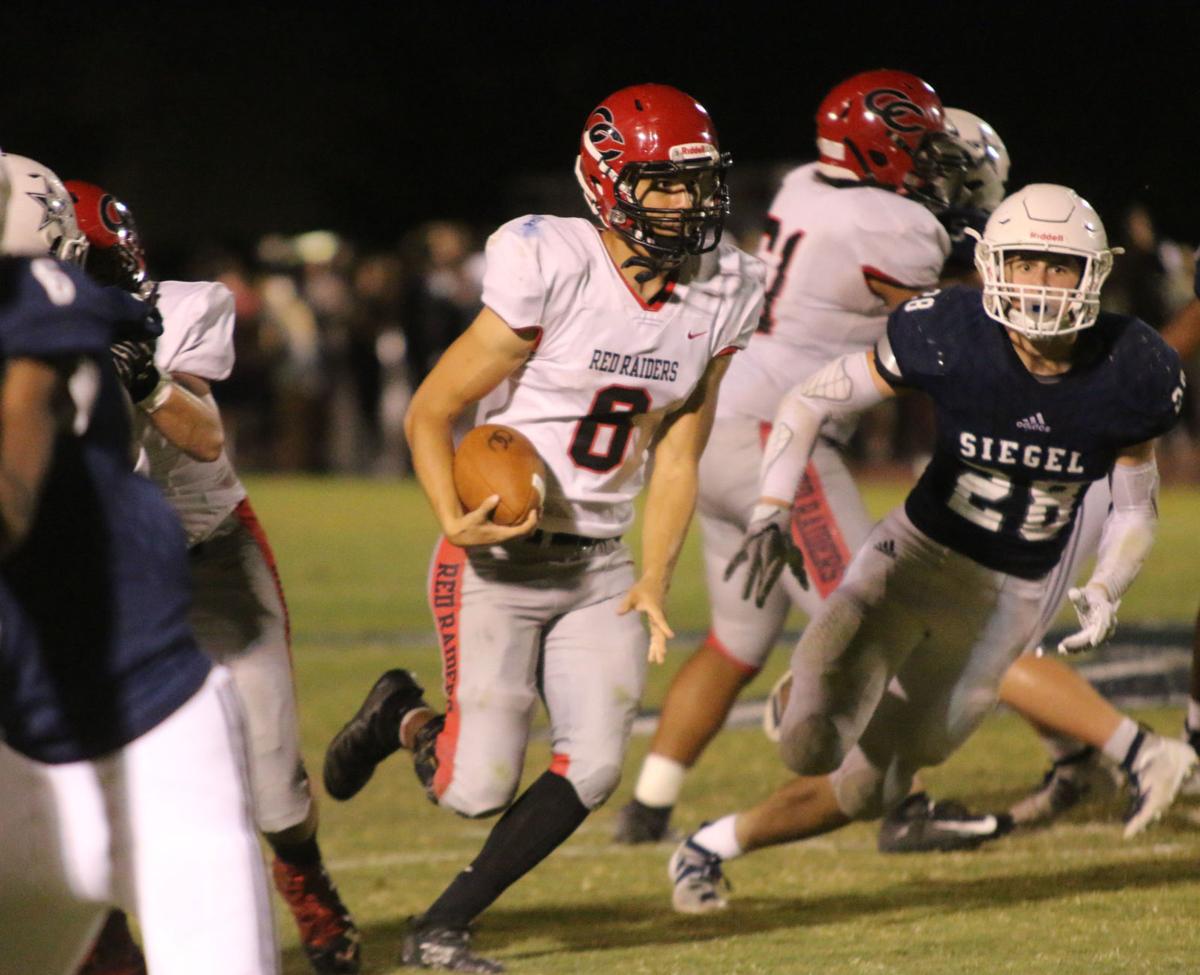 Matthew Pittman breaks off on a run late Friday against Siegel. The Raider quarterback finished the night with a pair of rushing touchdowns and a passing touchdown to C.J. Anthony.

An excited C.J. Anthony runs toward the visitors' stands after time expired Friday night following the CHS victory. Anthony played a major role with two touchdowns, including a punt return to the end zone in the fourth quarter.

Matthew Pittman breaks off on a run late Friday against Siegel. The Raider quarterback finished the night with a pair of rushing touchdowns and a passing touchdown to C.J. Anthony.

During halftime of Central High School football's road game at Siegel, one of the songs played by the Stars' marching band was Frank Sinatra's "Luck be a Lady."

Siegel ran out of luck in the second half as the Red Raiders played spoiler on the Stars' homecoming night and returned to Coffee County with a 42-36 victory.

This was the first win of the year for CHS, as well as the first game where the Raider offense recorded a touchdown since the season opener at Franklin County.

"First of all, it's great to win. I'm just so proud of these kids. They've worked hard, they've earned it," Coach Doug Greene said. "They came out and decided they wanted to do something when everyone else was sitting back wanting to see what would happen."

Both sides of the ball showed vast improvement over the previous game against Blackman on Friday, September 6. On the defensive side, CHS recorded two interceptions, including a pick six in the first quarter.

"Especially late in the fourth quarter when we were just running it at will, we had a fresh left side, a fresh right side, so we were able to kind of pound them a little bit," Greene explained. "That's what your depth does for you."

The Raiders got on the board at the close of the first quarter when Blanton Brown picked off Siegel quarterback Tucker Spears. Brown ran it back 68 yards to the end zone to put CHS ahead with six seconds on the clock.

Siegel then tied it at 7-7 with 5:20 left in the second quarter off an eight-yard run from Ethan Vanhook.

The Raiders responded on the next drive. After a long pass from Pittman to Collin Ward put CHS in Siegel territory, Pittman connected with C.J. Anthony to put the team back ahead 14-7 before halftime.

After Pittman added his own rushing touchdown with 5:19 left in the third quarter, Spears responded with one of his own for the Stars. A missed extra point on Pittman's touchdown left the Raiders ahead 20-14 at the quarter's close.

Starting the fourth on the Siegel 22-yard line, Pittman ran it all the way in for another rushing touchdown to again make it a two-possession game.

Not long after, a costly fumble set Siegel up on the CHS six-yard line, which the Stars converted into a touchdown.

Momentum swung right back to the Raiders' favor on the ensuing possession, when Anthony broke loose on a deep punt return for his second touchdown of the night.

"We were expecting an onside kick so we were in an onside recovery scheme," Anthony said. "He kicked it deep, I got a good block by my fellow friend Terreall Clayborn. I was able to bounce it outside and I was just able with my God-given speed to just outrun everybody."

On the next Siegel possession, an interception from Kelvin Verge put the CHS offense back on the field. That same drive, Marshall Haney punched in a touchdown from 11 yards out to make it a 42-21 game.

Siegel was not out of it yet. The Stars hit two more touchdowns at the 4:09 mark and again with 56 seconds remaining.

With their lead cut to six with under a minute to play, the Raiders prevented the Stars' onside kick attempt and ran out the clock to preserve the win.

"It was good, we worked as a team and it's finally showing up that when we set goals and make them, we can play ball," Pittman said. "It's finally done, we've always marked it down that we could always do this and we finally reached it. Now it's just another milestone we get to reach."

The Raiders will return home next week on Friday, September 27, to take on Cookeville. Kickoff is set for 7 p.m.